‘The Lord Has Brought Me Home’ 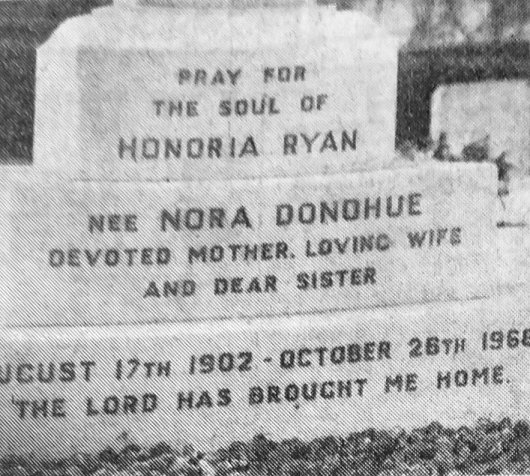 Nora Ryan was 27 when she left her home in Denaby’s “glasshouse buildings” to settle in America, but her heart always stayed in England.

When she returned to the old country for a holiday in 1968, she expressed a wish that when she died she would like to be buried in Denaby cemetery.

Then, with her bags packed, the passage in the Queen Elizabeth booked, and a taxi waiting to take her on the first stage of her long journey back to New York, she fell ill and had to enter Montagu Hospital. The authorities offered to send her home, hut Nora asked to stay in England. Three weeks later she died.

Now, the white marble headstone above her grave in Denaby Cemetery, is inscribed, “The Lord Has Brought Me Home.”

Nora’s sister, Mrs. Mary Johnson, of Doncaster Road, Mexborough, said this week, “Nora was always very happy in America, but her heart was here in England. She visited us when she could, and some of our friends from Denaby stayed with her in New York when they visited America.”

Nora came to England for the ordination of Father Michael Hurley, and later she brought her daughter, Catherine, to see Denaby.

Now Nora Ryan — some will know her by her maiden name of Donohue — has had her last wish granted. A Celtic cross, specially made by an Essex firm, marks her resting place in Denaby Cemetery.

Farewell Party For a Conisbrough “American”