The New Offices of the Denaby and Cadeby Main Collieries Ltd 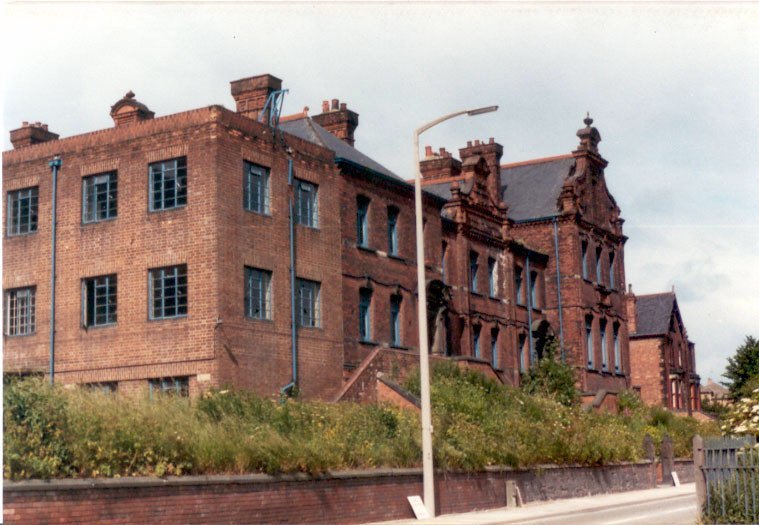 In the Doncaster Road, fronting the M.S.and L.Railway Station at Conisborough, and as the crow flies, almost directly facing that mammoth enterprise, the Cadeby Main Colliery, the Denaby and Cadeby Main Collieries Ltd, of within the last 12 months have erected for themselves a handsome and commodious suite of offices.

In the magnificent school, church, and in the New Hotel at new Conisborough, the Denaby Main company has achieved a reputation for building structures of an elaborate, substantial and practical character, but they have gone far beyond their previous achievement in the erection of their new offices. Externally, the building, which is in the ornamental classical style, might be taken for a Memorial Hall, and it certainly would never be supposed that such a magnificent and imposing building existed for commercial purposes, but for the fact that the name of the Company owning the structure is set forth on the central gable.

The building stands upon an area of nearly 2000 ft.², Avenue frontage of exactly 100 feet. It is raised 16 feet from the footpath, and is fronted by a sloping bank which in course of time, will become a shrubbery. The offices are built of red pressed break, with dressing of red terracotta, which had been made by the Heather Brick and Tile company, of Ashby de la Zouch, to special design. The roof is covered with Welsh slates, and capped with red ridge tiles. The extreme height of the main gable is 60 feet from the road level, and the gable is topped by an ornamental pediment. In the centre of the building, is another ornamental gable inscribed with the name of the firm as follows:

Each of the windows, of which there are 76 in all, is of an ornamental, and exterior of the building presents at once, an appearance of solidity and artistic finish. 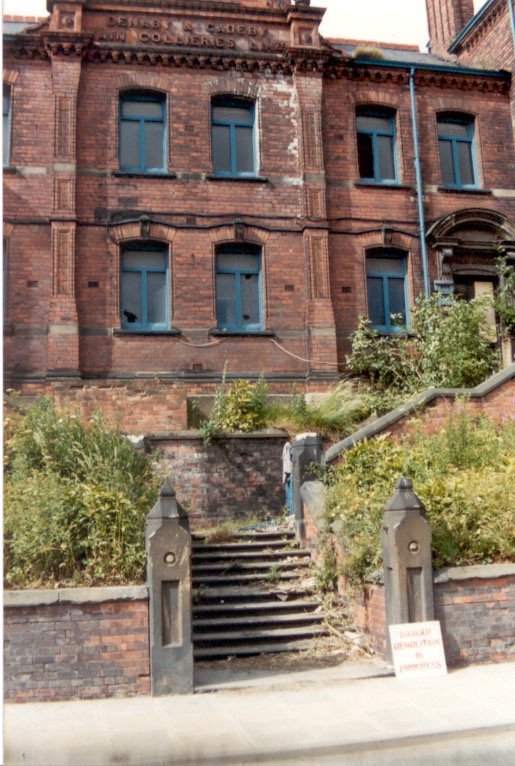 The officers are approached by a flight of stone steps, 8 feet wide, branching from a spacious landing on either side, to the public and private entrances. Immediately inside the public entrance is a spacious vestibule, coal flawed with North Wales Ruaibin Mosaic tiles, and provided with enquiry windows, opening into the cashier’s and general offices. A comfortably furnished with a room almost out of the vestibule, and adjoining this, is a general office, a palatial apartment, 54 feet in length, with a width of 24 feet. It is 50 feet I, with a richly ornamental ceiling. It contains seating room for 24 clerks, allowing each 7 foot 6 inches of desk room. The days are of mahogany, on oak pedestals, surrounded by brass book rails and gas standards. Each clerk has been liberally supplied with desk and cupboard room, and over each desk is a hanging electric lamp. The office is fitted throughout with electric light and bells, as well as with gas fitting for use in emergency.

There are two fireplaces in this office, of ornamental Mansfield stone, fitted with movable stoves. The windows are fitted with coloured leaded light, which even in the dullish weather, give it a bright and cheerful appearance. The general offices most elaborately furnished, and is floored with dark brown linoleum. Beneath the office is a huge stationery store, and leading out of it a larger strongroom. This is entered through a Milner’s fire resisting and thief resisting door. The room which is 18’ x 13’ 9 inches in extent, is lined with glazed firebrick and the walls, floor and roof are of a unified thickness of 3 feet and are of solid concrete. It contains no less than 280 feet of shelving.

So much for the general offices. A Corridor takes us to the private rooms of the principal officials of the firm, which are also approached from outside by a separate private entrance. The first of the private offices is the commercial manager’s, an exceedingly fine room, 20ft. by 16ft., with a complete speaking tube and electric bell communication. This office is splendidly furnished with the latest and most convenient type of office furniture, and a huge safe is built into the wall on one side of the room with an ornamental framing of wood and glass surrounding it. On the opposite side of the passage to Mr. Nicholas’s room is his clerk’s office, and apartment measuring 17ft. 9in. by 16ft. containing ample cupboard accommodation in addition to the customary office furniture which is of the latest and best pattern.

The assistant Secretary’s office is the next along the corridor and measures 17ft. by 16ft. A huge safe is embedded in the wall, and the office is well provided with desks and cupboards. Adjoining is the office of Mr. Wilkie, the secretary of the company, the dimensions of the room being 17ft. by 16 feet. Facing the door as one enters is a handsome chimney piece, and in the recess on one side is the secretary’s safe, the other recess being fitted up as a small private lavatory, the framing of pitch pine and glass being the same in both cases. The most conspicuous feature of the furniture in the secretary’s office is an ingeniously contrived set of pigeon holes forty in number, which are so constructed that one lock securely fastens the whole of them. These are constructed of English oak, and is capped by an ornamental pediment. This piece of furniture is 9ft. 9in. high 12ft. 9in. long, and 1ft. 6in. deep. It contains forty pigeon holes a foot square fitted with a sliding door which runs on steels castors concealed by the wood work, and each sliding door is provided with a slot for a label showing its contents. When the whole of the forty sliding doors have been pushed to a door at the extreme it end of the ‘nest closes and locks, rendering it impossible for anyone of the pigeon hole doors to be opened. This piece of furniture which is at once solid and ornamental in appearance, was designed by Mr. H. L. Smethurst, the architect of the building on whom for its ingenuity it reflects the highest credit. Mr. Wilkie’s office is fitted up with ornamental castings of pitch pine which has a beautiful effect the wood having been chosen with a view to obtain a contrast and variety of grain.

Opposite the secretary’s office is a room for his clerk, which is furnished similarly to the office of the commercial manager’s clerk. A doorway marked private now takes us into the caretaker’s department, and this floor is provided with a sitting-room 16ft. by 13ft., a kitchen 16ft. 6in. by 14ft., fitted with a patent cooking range, a scullery, wash-house, and other offices, the whole being cellared underneath.

The main staircase to the offices above has a double approach, that is it can be ascended from the general offices side. The staircase is of pitch pine; and here again the work of the contractor has been beautifully carried out. The massive balustrade and newels is of pitch pine, the panels being fitted with wrought iron metal work. Directly over the general office is the drawing office. This is 24ft. by 23ft., and is fitted up with cupboards for pit clothes, plans, etc., and is provided with a large pitch pine pedestal table. 12 ft. 6in. by 7ft. in the centre of the room. Adjoining this is a store room, 19ft. by 10ft. for drawing materials. Samples of coal and surveying materials.

The architect’s office comes next, a splendid apartment, 24ft. by 18ft. 9in. fitted with Standard electriciers, which are movable to whatever spot they are required in when work is in progress. It is also provided with a Cowen’s patent reflecting gas lamp and speaking tube and electric bell communication with the manager. There is a very pretty fancy marble grate, and ample cupboard accommodation for plans and drawings. Mr. Smethurst, in planning his own apartment, evidently intended that the architect should look well after the architect.

The office of Mr. W. H. Chambers, the manager, which is on this floor, is 17ft. 9in. by l0ft., and is fitted with a ‘Smethurst’ nest of pigeon holes similar to that described in dealing with Mr. Wilkie’s office. In the recess on either side of the fireplace are pin rails for the classification of reports and the furnishing of the office is in other respects complete and practical.

Adjoining the strongroom is a telephone room, 17’ 9” by 16’, partioned into large separate compartments to contain the instrument for the colliery circuit, the National Telephone Exchange and the Denaby Main Post office.

The dining hall is an apartment 32’ x 17’, line round with pitch pine which is a wonderful pretty effect. The room is 14 feet high, with an ornamental ceiling, a fireplace at each end. It is lighted by ornamental electric tulip -shaped clusters descending from the ceiling, and is fitted with speaking tubes to the kitchen. It is intended that the clerk employed by the firm shall dine here daily, and it is a splendid apartment for this purpose.

Adjoining is the Board room 22’ x 20’, a splendidly furnished apartment, in the centre being a leather topped oak table, with the necessary armchairs surrounding it. There is a massive sideboard, and on the walls are some beautifully made models of the three ships belonging to the company.

The shipping office, 17’ 6”x 16’ is next, it being intended that the shipping business of the firm shall be transacted in it.

This completes the suite of offices, but a private door on the floor leads to the caretaker’s best sitting room, two bedrooms, bathroom and other conveniences. A back staircase leads from the floor below, for the use of the caretaker.

The hall of the building has been designed even to the minutest details such as the pattern of doors, panelling et cetera by Mr H.L.Smethurst, the architect of the company, and may be described as by far his best effort. He has succeeded in combining utility with beauty in a more successful fashion, and it may be said of the building that while there is nothing ugly about it there is, nothing in it that is purely ornamental and without use.

The contract will be carried out by Messrs H Arnold and Sons of Doncaster, who have done their work splendidly, and in a fashion to defy adverse criticism. The woodwork throughout is exceptionally fine, and the workmanship excellent. The still greats et cetera were supplied by Messrs Newton Chambers and Co. Sheffield, and electric bells and lighting apparatus, which are installed throughout the building and be fitted up by Mr HM Edwards of Wakefield, who also deserve commendations for the style in which his work has been done. The painting was done by Mr G Lent of Doncaster, was put both good workmanship and material into his contract, as has also Mr George Appleyard of Conisborough, who has done the paper hanging. The floors, which all have been covered by quarter inch line oleum have been attended to by Mr T Trotter of Doncaster, who has done his work well. The Bennett furnishing company of Glasgow have provided the office furniture, which is all of the more solid and useful character will stop

The architect it is interesting to know made about 130 drawing, using over hundred 50 yards of drawing paper for his plans and details of the building, which is cost between £6,000 and £7,000 and appears to be worth it moreover.