to Write History of the Two World Wars. 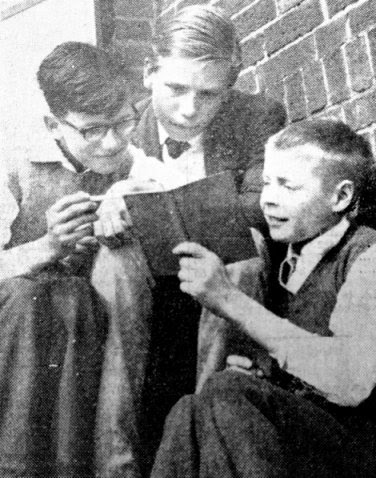 While most children of their age spend their summer holidays, roaming the feels and streets in search of something to do three Conisbrough lads will have more serious business on hand.

Steven Pratt, Georgia Goodban and Alan Troop, all aged 13, and all pupils of Conisbrough Northcliffe High School, are setting out to write a book about the world wars.

The lads started making plans for the book about a month ago, questioning parents, teachers and friends, and setting down the facts they learned in a notebook.

“It all started when we saw Stephen’s name in the papers some time ago,” explained “reporter” Alan Troop 31 Park Gate Avenue, Conanby

“We thought – Why can’t we get our names mentioned?” But since that time we had been talking about the World Wars quite a lot at school and we all got really interested in writing the book,” Alan told the “South Yorkshire Times” on Tuesday.

He went on: “Half the book will be about the First World Wall, and half about the second.

“We are hoping to get most of the information about the first one during the summer holidays. It should take us about seven months altogether.”

In the spirit of dedicated writers the quartet have decided to make a sacrifice to accomplish their task. There are each planning to get jobs delivering papers to meet their expenses.

Printer and illustrator for the book, which will be entitled “Memories of the Wars” will be George Goodban of 11 Maple Grove, Conisbrough.

He plans to illustrate battle scenes for the book, and will be doing all the writing and printing, as Alan and fellow researchers Steven Pratt, of 11 Leslie Avenue, bringing 10. The operations are hampered because as yet there are no typewriter or printing paper. This they ought to buy with money raised from their paper rounds.

The book may not be completed for some time, but when all the information has been compiled. The lads are planning to give the “South Yorkshire Times” Printing Company the chance to publish it! They also hope that our readers will help them to gather as many facts as possible by sending them any further useful information.

Steven’s father, Mr Walter Pratt, who is himself a veteran of the Burma campaign, commented on Tuesday: “I think they should manage to compile the book  if they get their heads together.

“If there is anything they want to know, I will help them where possible.”

New Plan for The United – Don’t write Denaby United off!