Conisboro’ were not at full strength at Thurnscoe on Saturday. They had to make two alterations, and they gave a trial to a new outside-left.

In the first half Thurnscoe were run off their feet and it is significant that Langford in the Conisbro’ goal had only five shots to deal with.

Conisboro’ scored first through Riley with a long shot. Soon after Thurnscoe got a goal. Before the interval Riley scored again with another long shot. 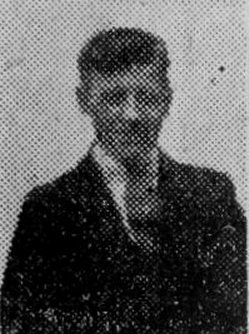 Kicking uphill in the second half the Conisboro’ forwards tired. Riley (picture) hit the crossbar six times with long shots. Langford was beaten seven times, but it was not his fault, In second half Conisboro’s defence fell to pieces and another four goals were got by Thurnscoe. The scorers for Thurnscoe were Exley (3), Swinburne (2). S. Smith and Saxton.

The Conisboro’ centre- half played a good game, and Ryles at centre-half  for Thurnscoe was sound. This player is improving with every match. Conisboro’ will have to struggle very hard to get in the top four.