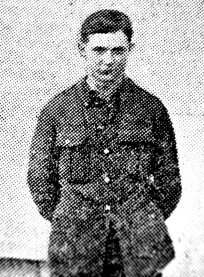 Pioneer Joseph Turnbull, Royal engineers, youngest son of Mr J.H.Turnbull, Clothier, Castle Street, Conisbrough has sent an intimation to relatives that he has received the Distinguished Service Medal from the Commander-in-Chief.

The medal was won on January 27, the Kaiser’s birthday.

Turnbull will be 20 years of age next due. He has been 18 months in the Army, and took part in the engagement at la Bassee