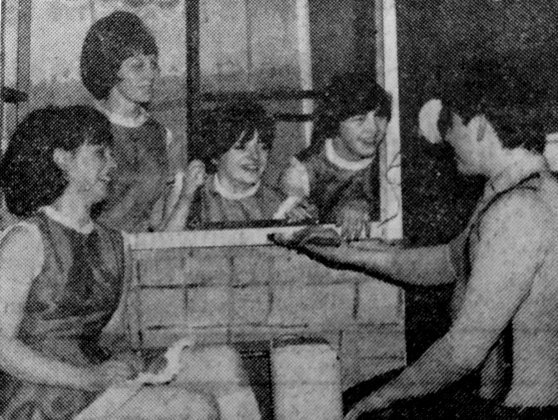 Members of the cast of Denaby Tom Hill Youth Club’s pantomime “The Beggar Prince,” Margaret Winstanley, Christine Beardsley, Margaret Hambrey and Sheila Kelly, smile their encouragement to John Jennings as he puts the finishing touches to the scenery

The Tom Hill Youth Club pantomime, ‘The Beggar Prince,’ which opened at the Youth Centre this week, is an excellent example of the high standards that can be attained, even by complete beginners
Many members of the cast of the pantomime, written by local man, Mr. Eric Smith, are completely new to amateur dramatics, vet the vitality and wit with which they attack the script belies their lack of experience.

Principal boy, Janine Kitson, portrays Ivan, ‘The Beggar Prince,’ and not only gives a convincing characterisation, but also makes good use of an excellent singing voice. Playing opposite Hancock, as Anne Durdock. She plays the part of the ‘village beauty’ very well.

Stephen Duffty, as Dame Durdock, is in the classic tradition of pantomime dames. His humour comes straight from the heart, and even the cast cannot refrain from the occasional titter.

Jarge, the old countryman, ‘aaarrs and ee’s’ his way into the audience’s hearts from the start, though I am sure he would do much better if he used his native dialect instead of attempting the very difficult West Country drawl.

Reg Attwell is surely the most hardworked member of the cast. He appears first as the Mayor of Green Vale, then as the Judge, as King Neptune, and also as Jake, one of two sailors, the other being played by Ian Stones.

Double humour is provided by Wilfred Revill and Alf Sewell as Phiz and Whiz, the village policemen, who seem to spend more time on the floor than they do standing up.

Mr. Smith appears briefly as Boris and the Captain of the ‘Hippy Hippy.’

Despite the excellent work of the leading players, the entire show owes its sparkling image to the never-tiring work of the six chorus girls – Christine Whittington, Margaret Hambrey, Margaret Potts and Margaret Winstanley. They do a number of effective dance routines. They have obviously put in a lot of very hard work to perfect routines such as the colourful Can-Can and the professional looking precision routine.

The piano is tirelessly played throughout by Mr. D. Blacklock.

Credit is due to the wardrobe staff, headed by Mrs. C. Smith, who succeed in providing colourful and varied costumes from obviously limited sources of supply.

Interludes of Amusing and well executed tap and ballet dancing are provided by pupils of the Elm Green School of Dancing, the principal of which is Mr. Smith, the author of the pantomime.

The cast and staff can feel gratified that, on Tuesday evening one woman enjoyed the performance so much that she made a donation of a pound.