“We are, Sincerely, Denaby United in New York”

News comes this week from a former Denaby couple, Mr. and Mrs. James King, now living at 692, Fifth Avenue, Brooklyn, N.Y., in a letter to the South Yorkshire Times” from Mrs King.

The letter tells of the visit to the Kings of Mr. James Mullins, of Minneymoor House, Conisbrough, and who is visiting America. Mrs. King gave a dinner in honour of their old friend, and says in herletter, “The party broke up in the wee hours. The majority of the guests were former residents of Denaby, and still remain faithful to that little mining town. It may not be marked on the map, but we still think there is no place like it.

We are, sincerely, Denaby United in New York.”

The party, which took place on August 1st, was the first of a series of parties to be given before Mr. Mullins returns to England. Guests at the party were Mr. P. Conway, Miss A. Conway, the Bradys Sisters, Mary and Bina, Mrs. Mary Keenan, Mr. and Mrs. Berkinshire, Mr. and Mrs. T. Mullins. The majority of these are former Denaby residents, and many people of Denaby will remember them.

August 1st was also the 23rd wedding anniversary of Mr. and Mrs. King, formerly Miss Nora Donohue, of Halifax, is a daughter of Irish parents Mr. King is also a native of Ireland hailing from the Galway district.

Letters pass regularly between Mrs King and her sister Mrs T Nuttall Nuttall, of 4, Crossland Street, Swinton, and Mrs. Nuttall has several photographs of the family. Mrs. Nuttall told a reporter on Monday that her sister, though she does not. want to live in England she would like to bring her daughter, Kay, who is 11, to Denaby to meet her relatives. Mrs. King visited Denaby in 1935, and broughther adopted daughter, Mary, with her. Mary was married last year.

Mrs. King was formerly employed as a nurse at Springwell House, Balby. When war broke out, she pledged herself to help any English or Irish Serviceman who contacted her, and made many of them comfortable and happy during their stay in America. One of these, a sailor from Halifax, was made so comfortable that his mother wrote to Mrs. King, and there is still a flourishing pen-friendship between the two women.

Mr. King and Mr. James Mullins came to Denaby from Ireland when Mr. King was in his ‘teens. Most of the other guests at the party were friends of Mr. King in Denaby and contacted him when they went to America. Mr. King’s three brothers are also in America, and one of them is an Inspector of Police at Boston. Mass. 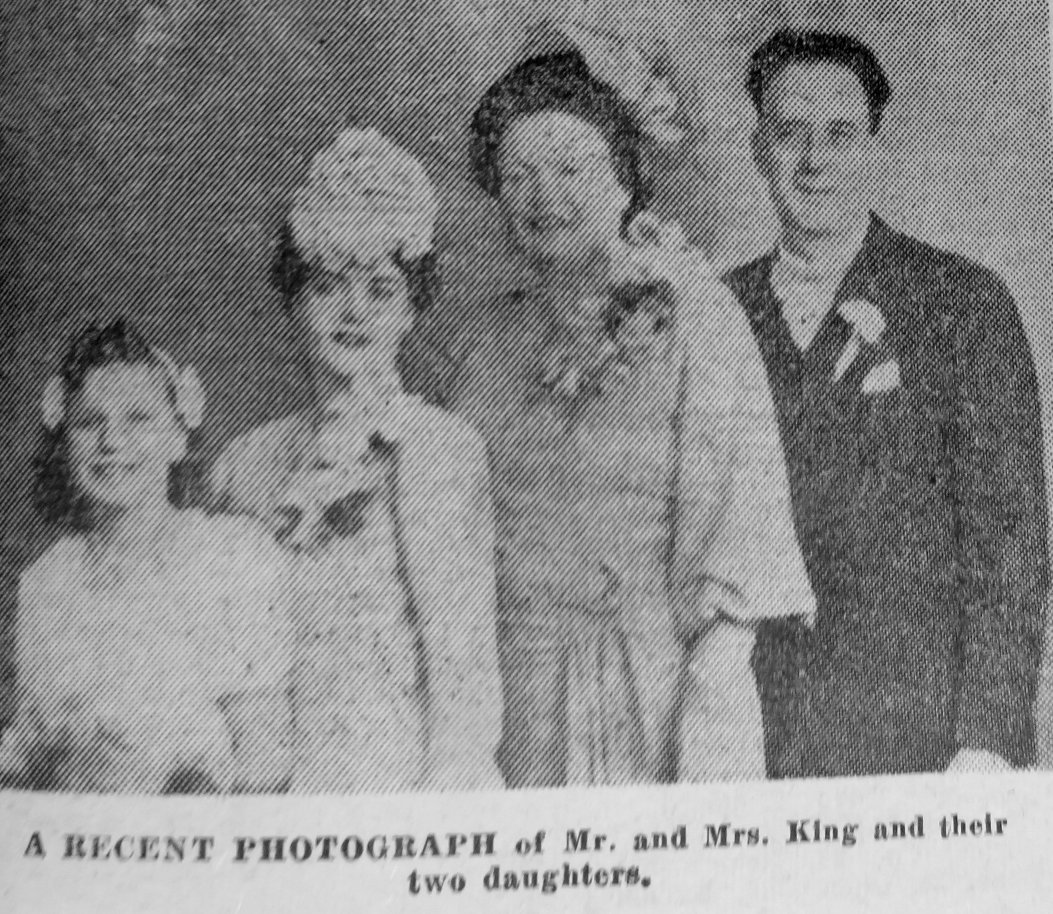