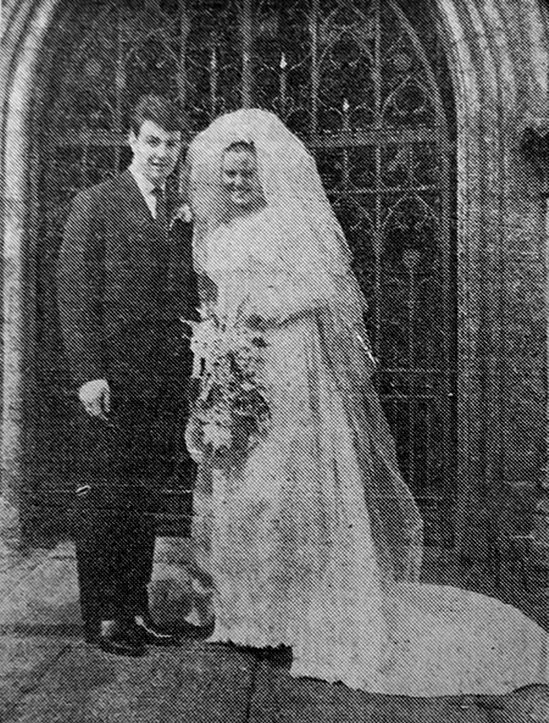 The bride is a teacher at the Ivanhoe Primary School, Conisbrough, and the school’s junior choir sang at the choral service, which was conducted by the Rev. G. F. Braithwaite. The organist was Mrs. I. Barber a teaching colleague from the Ivanhoe School.

The bride, given away by her father, wore an Empire line gown of Duchesse satin trimmed with Guipure lace at the hemline, wrists and bodice. Her gown had a full train and her full length bouffant veil was held with a head-dress of roses. She carried stephanotis, lilies-of-the-valley and bridal gladioli.

She was attended by her cousin, Miss Janet Thompson and the bridegroom’s cousins were Misses Janet Hinchcliffe and Julie Boldan.

The bridesmaids wore long Empire line dresses with bell sleeves in turquoise slub rayon trimmed at the bodice and sleeves with white Guipure lace daisies. The chief bridesmaid carried a handspray of daisies while the smaller attendants carried posies of daisies.

Best man was Mr. Barry Edge and the groomsmen were Mr. K. Brandreth, Mr. S. Boldan and Mr. A. Price.

The bride’s mother wore dress and coat of pale blue figured Lurex Crimplene with beige accessories, while the bridegroom’s mother chose a cream Crimplene dress with a matching coat of figured Crimplene and lime green accessories.

A reception was held at the Welfare Hall, Conisbrough, after which the couple left for a holiday in Sheringham, Norfolk, the bride travelling in a blue dress and two-tone blue checked coat to match with wine coloured accessories.