To live in Spain 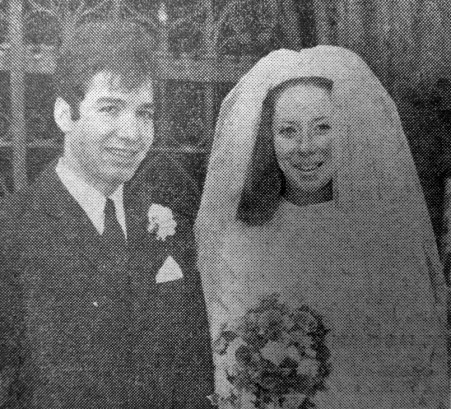 The Rev. G. W. Braithwaite officiated at the choral service and the organist was Mr. W. Stables.

In the absence of her father, unable to attend through ill-health, the bride was given away by her uncle, Mr. J. H. Wilkinson.

The bride chose a straight dress of heavy crepe with roll collar and loose sleeves, trimmed with Guipure lace with a similar panel down the front. She wore a full-length veil, held by a stiffened head-hand and carried a posy of pink roses, white flowers and trailing Ivy.

The bridesmaid was Miss Beverley Moody who is a niece of the bride. She wore a white  crimplene dress with white swansdown bands in her hair, and carried a bouquet similar to that of the bride but in a smaller version.

The best man was Mr. K. Moody and the groomsman Mr. M. Jackson.

A reception was held at the home of the bride, after which the couple left for the honeymoon at Torremolinos and Granada, where they are to make their new home. The bride travelled in a navy blue and beige suit with navy and beige accessories