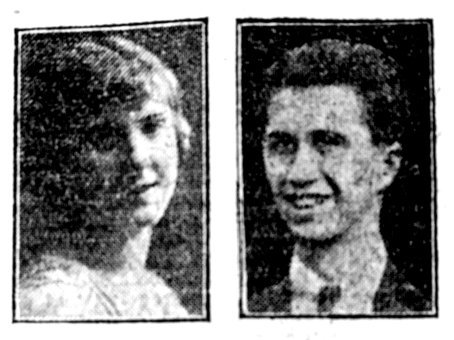 The Vicar, the Rev. 11. Lee, officiated, and Mr. J. H. Grayson played suitable music on the organ. Mr Stanley Broadhead, brother of the bridegroom, was best man, and the groomsman was Mr. A. L. Gavin.

The bride who was charmingly attired in an ankle length dress of white georgette embroidered with diamante, with a fitting bodice and coatee mate, to match, was given away by Mr. Arthur Robinson, her uncle. Her veil, which formed a train, was an embroidered square of silk net with a wreath of orange blossom, was kindly lent by Mrs A. M. Shepherd.

The bride carried a bouquet of pink roses and the bridesmaids bouquets were of cream loses. A reception was held after the ceremony at “St. Bees.” Mrs. Robinson, mother of the bride, wearing a becoming dress of Hack georgette trimmed with pink, with a black velour bat en suite. When Mr and Mrs. Broadhead left for London, where the honeymoon is being spent, Mrs. Broadhead wore a green coat trimmed with mitred collars and cuffs over a green flowered crepe de chene dress, with a black panne velvet hat and black shoes’.

Among the numerous wedding presents received the guests from the Mexborough Cricket club, Swinton Hockey Club, Mexborough Dramatic society and staff of the Mexborough secondary school the bridegroom having acted as cricket coach at the school.