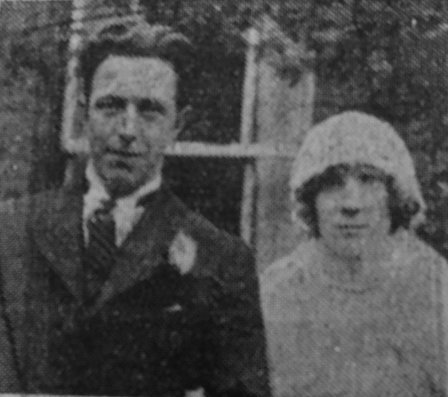 Considerable local interest was taken in the welding of Miss Muriel E. Sellers, youngest daughter of the late Mr. T. R. Sellers (for twenty years Headmaster of the Station Road Schools, Conisborough), and Mrs. Sellers, Lime Grove House, Conisborough, and Mr. G. Todd, of York, which took place at the Wesleyan Church. Conisborough. on Monday, in the presence of a large gathering of friends.

The bride is well known in Conisborough and was for some years on the clerical staff of the Denaby and Cadeby Main Colliery Company, and was a prominent member of the local hockey and tennis clubs.

The bride was given away by her brother, Mr. F. Crossley Sellers, of Stockport, and Mr. G. Sellers, of Watford, was the best man. She was attired in a gown of ivory georgette and ivory lace, and wore a veil of Brussels net with a coronet of orange blossom. She carried a shower bouquet of pale pink carnations.

Mr. H. Johnston was the organist. The ceremony was followed by a reception at Lime Grove House, the residence of the bride’s mother (Mrs. T. R. Sellers). Among the numerous presents given to the bride was a handsome mahogany china cabinet from the staff of the Denaby and Cadeby Colliery offices.

The honeymoon is being spent at Torquay. Mr. and Mrs. Todd will reside in Doncaster.