A Picture Taken After The Ceremony. 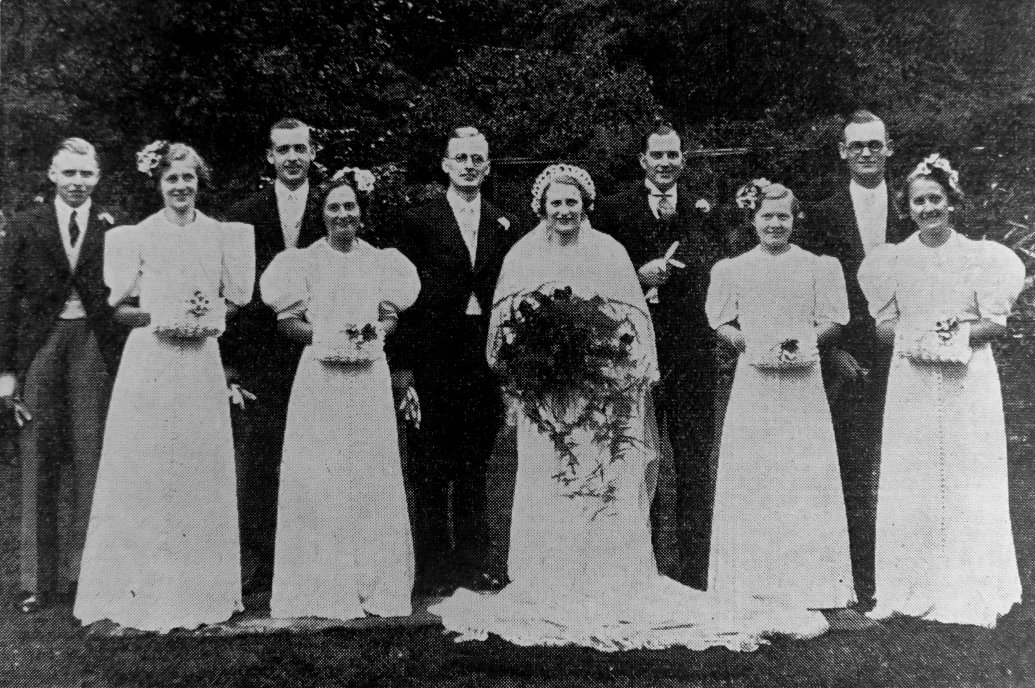 The service, which was choral, was conducted by the Vicar of Swinton, the Rev. T. G. Rogers. Mr. Irving Tingle was at the organ, and the hymns, “Love Divine, all loves excelling” and “Thine for ever. God of love,” were sung.

The bride, who was given away by her father, made a charming picture in, her gown of ivory velvet. The gown was square necked and panelled back and front, the former ending in a train. Her veil was originally lent to the bride’s sister, Mrs. J. C. Wilkinson, by Mrs. Crossland, of Mexborough, and her halo wreath was kindly lent by Mrs. S. C. Hacking, of Mexborough. She carried a bouquet of red roses.

The best man was Mr. John F. Grove and the groomsmen were Messrs. G. D. B. Gray, R. Tyrrel, and E. Miller, of London. After the ceremony, Master John Wilkinson, nephew of the bride, presented her with a horseshoe at the church door.

A reception was held at the Masonic Hall. Swinton. The bride’s mother received the guests in a coat of brown cloque over a dress of briar-brown satin backed crepe, with a brown picture hat. She carried a spray of cream carnations. The bridegroom’s mother wore patterned silk dress with coat and hal of navy blue and a spray of carnations.

Bride and bridegroom left for the south of France, the bride wearing a dress of Hungarian folkweave with a silver fox fur and black accessories.

The wedding gifts included an electric fire from the C.P.A. Strines Works, carvers from St. George’s School Staff an afternoon tea cloth with Cluny lace from the Staff of Belle Vue Road Senior Girls’ School. Leeds. and a silver egg cruet from the Rangers and friends of St. George’s Church, Leeds.you