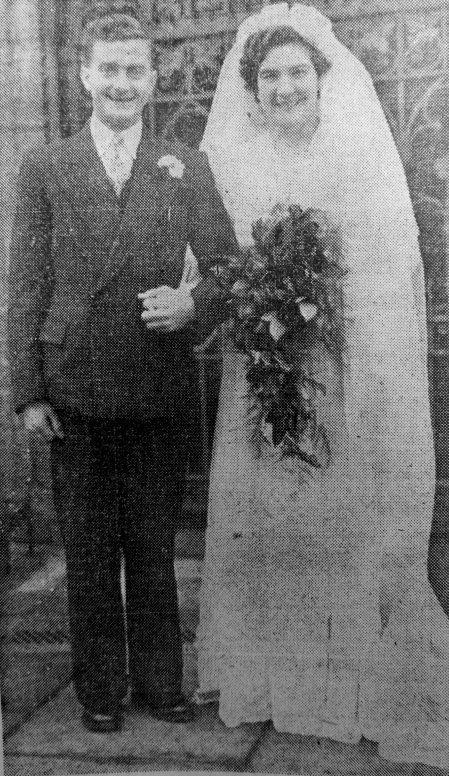 The bridegroom, a former member of Conisbrough Old Folk’s Treat Committee, is employed in the Architect’s Department of the Isle of Ely County Council, ,and received a gift from his colleagues.

The bride comes from a well-known South Yorkshire sporting family. Her father was formerly assistant secretary to Mexborough Football Club and an ex-player; one brother is a referee and Yorkshire League linesman; another brother is a Gainsborough Trinity half-back; and an uncle, Mr. “Matt” Taylor, is Denaby Utd’s secretary-manager.

Mr. W. Farmer was organist for the choral service.

Given away by her father, the bride was in Brussels lace and net, her gown being cut on crinoline lines She also wore a veil and a wreath of orange blossom and carried red roses, and was attended by Misses E. Levers and L. Rollinson, in pale blue with flowered headdresses, and carrying carnations and sweet peas, and by Miss Eileen Kelly in pale blue with poke bonnet to tone, and carrying anemones.

From the bridegroom, the bridesmaids received trinket bowls and bracelets.

The bride’s mother chose a royal blue dress, with beige coat and hat to tone and the bridegroom’s mother wore a two-piece in ice blue with black accessories.

The reception was held at the Miners’ Welfare Pavilion, Conisbrough, and Mr. and Mrs. Taylor are to reside in March, Cambridgeshire.