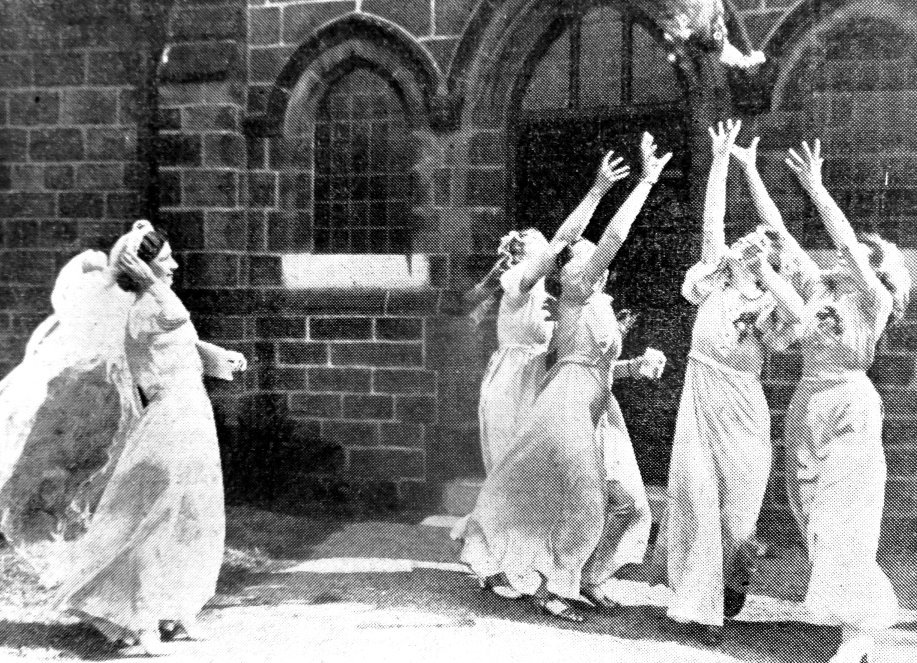 After the wedding ceremony at St. Alban’s Catholic Church, Denaby, on Monday, of Miss Winifred Prendergast, eldest daughter of the late Mr. and Mrs. David Prendergast, of 62, Loversall Street, Denaby, and Mr. Michael Rodgers, eldest son of Mr. and Mrs. T. Rodgers, 76, Cliff View, Denaby, the bride and bridesmaids took part in the age old ceremony performed by the bride of throwing her bouquet of roses to the bridesmaids. The traditional belief is that the bridesmaid who catches the bouquet will be the next to be married. The bridesmaids are pictured above in the act of trying to catch the bouquet, though it is not recorded which one was successful.

Nuptial Mass was celebrated by Mr. F. J. Sole, parish priest, and the bride, who was given away by her step-brother, Mr. Colin Marrow, was attired in an ankle-length gown of white satin, with a veil and wreath of orange blossom. She was attended by four elder bridesmaids, Miss Catherine Prendergast, Helen and Delia Rodgers and Joan Quinn, all of whom were in blue satin, with veils and blue flowered head-dresses to match. They all carried missals.

Messrs. Bernard and John Rodgers were best man and grooms-man respectively. A reception was held in St. Alban’s Catholic School.