Leaving Tickhill for Conisbrough, a hill to the left of the road is supposed to be the site of the church, All Saints, and edifice that existed prior to Tickhill church. Our route was through a purely farming district. The hedges are kept low, many of them are of holly, and they are lined in places with spreading yew trees. Here and there a farmhouse is passed, with its clump of trees, and buildings covered with red tiles. The fields are large, and quantities of grain grown. The country becomes more picturesque as Wilsick is approached. The road rises, and pleasant prospects are obtained of the level country of the towers of churches and the distant hills and woods

Leaving Edlington Wood and village to the right, the road descends into the Valley of the Don, and the country suddenly assumes as beautiful an aspect as it had previously been somewhat monotonous, with views extending from many miles over the Vale of the Don

A turn in the road, and simultaneous exclamations of delight burst from us as we come in sight of Conisbrough Castle. The massive great keep stood out to the right in stately grandeur from a dark wood, the houses of the town – whitewashed and red tiled, and surrounded with gardens – rose in terraces to the left of which was seen the old tower of the church. Verdant slopes, reaching the glorious green of spring, spread around. In front of hills and a rich country to the right, in the distance, the towers and spires of Doncaster and Sprotborough rest, the grand front of the hill backed by a thick wood. On this beautiful scene shines the morning sun, lighting up the landscape brilliantly. It was a magnificent sight never to be forgotten 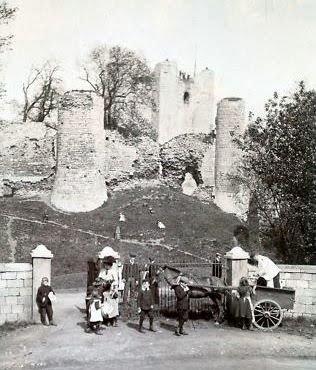 Descending to Conisbrough we climbed the Castle Hill and gaining the Castle yard the poetical ideas with which we approach the pile were ruthlessly dispelled. 13 trains had on the previous day brought thousands of excursionists and they had left their marks behind them. The grass was trodden bare. Strewn about were piece of paper, orange peel, mussel shells, decayed embers of fires hastily lighted, and other relics of the inroad of the “cheap trippers.

We can do better than copy from “Ivanhoe.” Sir Walter Scott’s description of this interesting old pile:

“There are few more beautiful or striking scenes in England than are presented by the vicinity of this ancient Saxon fortress. The soft and gentle river Don sweeps through an amphitheatre, in which cultivation is richly blended with woodland, and on a mount, ascending from the river, well defended by walls and ditches, rises this ancient edifice, which, as it Saxon name implies, was previously to the conquest, a royal residence of the Kings of England. The outer walls are probably been added by the Normans, but the inner key bears tokens of great antiquity. It is situated on a mount, at one angle of the inner court and forms a complete circle, perhaps 25 feet in diameter. The wall is of immense thickness, and is propped or defended by six huge external buttresses which project from the circle, and rise up against the side of the tower, as if to strengthen or support it. These massive buttresses or solid when they rise from the foundations and the good way higher up, but are hollowed out towards the top, and terminate in a sort of turret, communicating with the keep itself. The distant appearance of this huge building, with the singular accompaniments, is as interesting to the lovers of the picturesque as the interior of the Castle is the eager antiquary, whose imagination. It carries back to the days of the heptarchy. A barrow in the vicinity of the Castle is pointed out as the tomb of the memorable Hengist

The lamented Prof Phillips writes of the places and in his usual incisive style at once demolishes the theory respecting Hengist:

“Conisbrough now appearing on its rocky mount – itself a rock, begirt with ancient trees – perhaps a monument of the noble Earl Warrenne, certainly not of Harold or Hengist, or any Saxon Prince, whatever may be the date of this neighbouring tumulus, which is popularly regarded as the tomb of vanquished or worn out Hengist. Conisbrough was Caer-Conan by the later Britons.”

The tower in excellent preservation externally is 21 feet in diameter, the walls 14 feet thick, the chapel in one of the buttresses measures 10′ x 12Â´, the stones reach 15 feet in height, and the top of the keep his 75 feet from the ground. The Castle Hill is thickly overgrown with tall trees, forming a green bower over itin the summertime. Up the top of the tower, from which there is a fine view of the surrounding scenery, is gained by a winding staircase in the wall.

After examining the Castle, we strolled down the riverside to the cliffs and ascending to the Turnpike road, went through Warmsworth and Balby.

Excavation is Next Stage of Castle Renovation.