My husband’s great uncle died down Denaby Main Colliery in 1959 as per his gravestone attached (see photo below). Other than this I have no other information on this ie what happened.

I have looked at various Mining Websites but there is no mention of this incident, I wondered if you have any information on other sites that may be useful in helping me with finding out what actually happened.

My husband’s mum is in her 70’s now and can’t really remember what happened apart from they struggled to get him out from the mine.

Thanks Jim, this is great, we are coming over to Conisbrough in Nov, so am going to do the rounds of churches, graveyards etc, to try and get as much info as possible on all Dean´s side of the family, wish I had gotten into Family history when we lived in the UK ? would have been so much easier, ah well itÂ´s all part of the fun

Oh Jim this is fantastic, thankyou so very much, this has made the tree a bit more interesting Have to say your site is very informative.

DeanÂ´s family have stayed in the Doncaster/Conisbrough/Mexborough area mostly since the late 1800´s early 1900´s so it is great to be able to get more information. Dean’s grandad saved a man from drowning in the Mexborough Canal in August 1930, we have the framed certificate, this sort of thing brings family history alive, whereas my family moved around so much, that a lot of photos and information just got thrown away as they didn´t want to carry it around each time they moved ( the downside of life in the services L), so I spend more time on Dean´s side of the family tree, information seems to be easier to get when people stay in the same place for decades!

Actually looking at your address I think you must live near one of Dean´s aunts, she lives on Old Road, she is a relative of the above, so I will email her this info

We live in Adelaide, we emigrated in 1997 with our two daughters, now grown up and we have two grandchildren, one is just 6 weeks old!

I am the family history geek, Dean just goes along with the flow, he was fascinated with your website he grew up on Holywell Lane, ( we now know where it got itÂ´s name from) and his dad lived not far from you until he died in October aged 71, , he was Barry Gough and grew up in the area, that would be weird if you knew him l

A forty five year old Denaby collier, Joseph Henry Straw, lost his life in a roof fall in the No.6 stall in the Barnsley seam at Denaby Main Colliery on Wednesday morning. Mr. Straw who lived at 20 Adwick Street, leaves a widow, one daughter, and three grandchildren.

While workmen were trying to release a collier after a fall of coal in the Barnsley seam at Denaby Main Colliery, another fall occurred before the rescue could be affected and yet a third fall which took three hours to clear, it was revealed at a Conisbrough inquest on Friday, into the death of Joseph Henry Straw on September 2 nd .

A jury returned a verdict of “Accidental Death” due to a fracture dislocation of the spine, on Mr. Straw, a married man, forty five years of age, of 20 Adwick Street.

Evidence of identification was given by Frank Chadfield, of 54 Warmsworth Street, his brother-in-law.

Contractor, David Venables, of 56 Clayfield Road, Mexborough, said Straw was packing in the waste in No.6 stall when the roof collapsed – “without any warning”. Witness told the Coroner, Mr. W.H. Carlisle, that during `snapÂ´ time – 10-20 a.m. – he Straw take a steel prop to his working place. ” He reared it up at one corner, and appeared to be looking for a `lidÂ´, when the roof fall occurred”, he said.

Venables went on to say that there appeared to be no faults in the roof and added, “IÂ´ve never known a waste to break like that, without any warning.”

In answer to a question from Mr. William Gibson, N.U.M. secretary at Denaby Main, witness said the deputy had instructed them to set additional timber where they were working.

Mr. Gibson : Could you say what supports were set in the waste where Straw was working ?

Witness : I didnÂ´t inspect it, but I only saw three props.

In answer to a question from N.A.C.O.D.S. representative Mr. E. Lockett, witness said he did not think there was sufficient timber in the waste.

Another contractor, Kenneth Booth, of 7 Wood View, disagreed with the first witness, “I should say that the waste was adequately supported, but I never ventured into the waste to inspect it. Joe was a careful workman and a capable collier. If he had thought it was unsafe he would have done something about it. There were plenty of materials to set props,” he said. Edwin Hackett, deputy, of 7 Leslie Avenue, Conanby, said he had inspected the scene of the accident on two occasions previous to the fall. ” I examined the supports and they were in good condition. I considered the place where Straw was working as safe. I did not give any instructions about setting additional props because I did not think there were any required,” he said.

Witness said he was aware of a `slipÂ´ in this particular part of the roof, “but it was very feint and not dangerous.”

In answer to Mr. Carlisle, witness said he could not have done any more – knowing of the `slipÂ´- which could have prevented the fall. ” It was well timbered and well supported,” Hackett said.

“If you knew of the `slip´, asked the Coroner,” was this liable to happen ?

Hackett replied, “No, this is the first time there has been a fall in this part. This `slipÂ´ was very feint and it was well supported. Had there been more props set it would have been more difficult for Straw to work.”

Hackett described the number and type of props set in No.6 stall and in answer to Mr. Gibson, claiming that there were insufficient supports, Hackett said that fourteen props were set in three rows, five steel props, on each pack corner and three in the middle, four wood props and five steel props as a back row.

Mr. Gibson suggested to Hackett there should have been four rows of timber, to which Hackett replied that there were four rows, but only three rows were supporting the roof.

Mr. Carlisle said it was clear to him there had been no negligence on the part of anyone. “As far as I can judge all safety rules were complied with. These men were experienced men”, he said.

Union representatives and the Coroner all expressed sympathy to the widow and family. Mr. Gibson also thanked on behalf of the family, the workmen who attempted to rescue Mr. Straw after the fall. 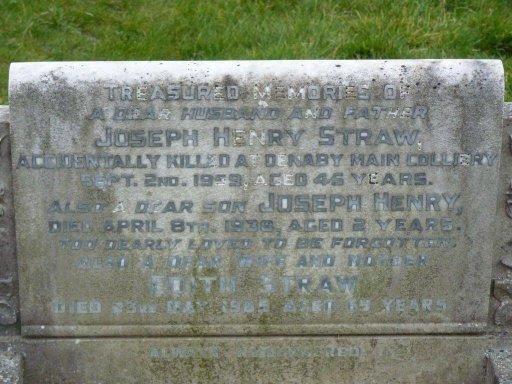 The Man Killed at Denaby

Breach of Rules at Cadeby – Refusal to Obey Deputy