Sgt Lawrence Calvert, V.C., M.M., fifth Battalion, Kings Own Yorkshire Light Infantry, had a splendid reception on Saturday evening, when he arrived in Conisbrough on leave from a Bristol hospital, where he has of late been treated for throat trouble. Elaborate arrangements had been made for giving him a public welcome, and they were carried through without a hitch.

Mr H.L.Smethurst was chiefly responsible for the arrangements. Sgt Calvert was met at Doncaster by Mr Smethurst and the joint secretaries of the Calvert testimonial fund, Mr Jessie Hill (clerk to the Conisbrough parish Council) and Mr W.L.Worsley, of Denaby Main. The party arrived at Conisbrough station about six oÂ´clock. The weather was all that could be desired, and it was not, therefore, necessary to curtail the program. There was a big crowd at Conisbrough station to cheer the wonderful Conisbrough soldier.

After greeting his mother, his uncle and aunt (Mr and Mrs William Calvert, of Leeds) and his brother and sister-in-law (Mr and Mrs Walter Calvert, of Conisbrough) Sgt Calvert had to face the camera in the station yard. He looked bronzed and well and very happy. He was wearing the Victoria Cross (which she received from the King only a fortnight earlier), the 1915 ribbon, ribbon of the Military Medal, and the ribbon of a Chevalier of the Order of Leopold.

One of his battalion officers, captain Lindsay Crawford, M.C., of Doncaster,had travelled down from Doncaster with him. 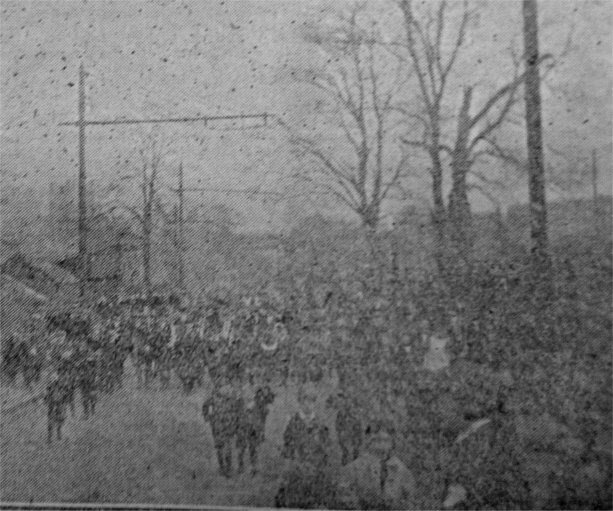 The Conisbrough brass band, under the conductor ship of Mr J.Hoyland, of Denaby Main, was waiting to head the procession. The band,except fortwo boys, is wholly composed of ex-servicemen, and five other members of the band are still serving. Six motorcars were in readiness to take Sgt Calvert, his relatives and friends, round the district. These were lined up in front of the colliery offices.

Mr Smethurst drove the first car, which contained Sgt Calvert, his mother and his aunt. On the windscreen. “V.C.” was conspicuously painted in white letters. Headed by the band, the procession went at a gentle pace through the streets of Conisbrough and back along the main road through Denaby Main to the level crossing, completing the “triumphal progress.” at the large Hall. There was a fine display of bunting everywhere, and the streets were filled with cheering and shouting people. Sgt Calvert had a very fine reception indeed, and was greatly gratified by it.

It had been arranged that a patriotic concert should be given in the large Hall. A fairly big crowd assembled here to hear the music, but more particularly to witness the presentations. These included a deed covering war bonds to the amount of Â£500, a purse containing Â£20 in cash, and illuminated address, a framed illuminated copy of the special divisional order recording Sgt CalvertÂ´s deed, and a gold watch. There is a further cash balance to be handed to Sgt Calvert when the fund has been wound up.

Conisboro’ V.C. Homecoming – 4. The Presentation – The Highest Honour on Earth