A word as to the social side of the colliery company´s enterprise.

A year or two ago the work people of the Denaby and Cadeby collieries made a presentation to Capt M.E.W. Pope, a director, and nephew of the chairman of directors, on the occasion of his marriage. In an admirable speech upon that occasion, Mr W.H.Chambers likened Denaby to the Garden of Eden and that speech inspired many an ill-natured jeer.

Of course, Mr Chambers was not intending to make for Denaby any ridiculous claim to physical beauty, but he wanted to show that the happy family spirit, after a period of storm and stress, did exist in Denaby. And there is a good deal of ground for that attitude.

The Colliery Company have provided generous for the social life of the community which is maintained by its industrial enterprise. As a concrete instance of this we give a photograph of the Large Hall, built by the colliery company on ample and tasteful lines, and now serving the dual purpose of the school for 900 children of the village – a voluntary school, mark you – and of a public hall.

The Largest Village Hall in England 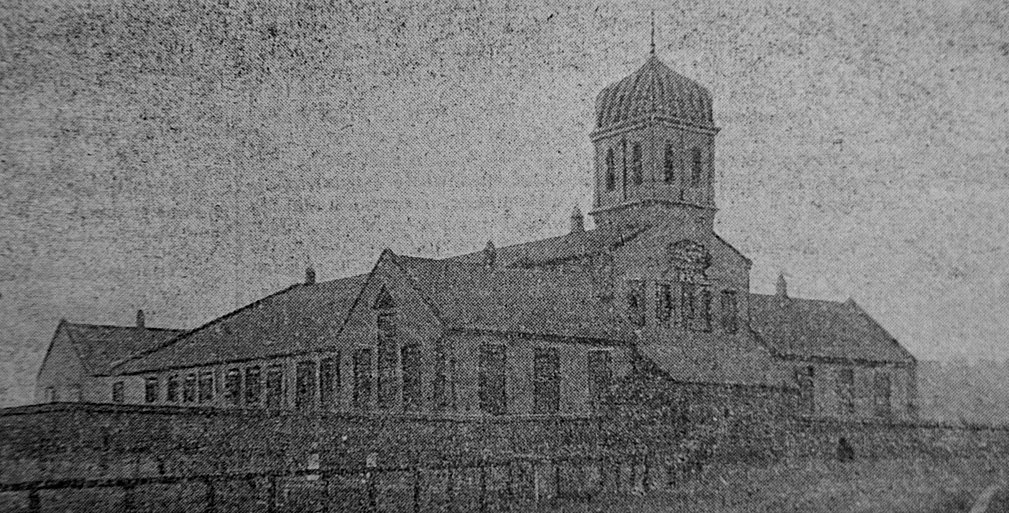 As a village hall, it is the largest and best equipped of any of which we have experienced.

Then there is a good class cricket club (at present holding the local championship), a Midland league football club, a men´s Institute and library, a Girl´s Institute, an Orchestral society, a Choral Society, a fine Ambulance Brigade; mining and literary classes, two large hotels (one of which is owned by the Colliery Company), gasworks, and Water Works, also owned by the company – and in connection with the water works there are two reservoirs, one at North Cliff, Conisbrough, and the other at Denaby Main, each with a capacity of 350,000 gallons; there is a recreation ground and open-air swimming Baths, a rifle range, a splendidly equipped Hospital established by the Colliery Company and the Lord of the Manner (Mr J.S.H.Fullerton) jointly, and now maintained by the miners; a cooperative society with a house purchasing scheme.

There are the following places of worship: All Saint´s Church, the Roman Catholic church, the primitive Methodist and the Wesleyan Churches, and Baptists Church, and the Salvation Army Barracks; while the predecessor of All Saints Church, St Chads Chapel of Ease, still exists as an Assembly room.

Quiet evening pursuits for the men on encouraged in the shape of 30 acres of allotments, some of which are controlled by the Conisbrough and Denaby Parish Councils, some by Mr F.J.O. Montagu, and 14 acres of which are let by the Company. There is also a cemetery at Denaby Main.

All these institutions are supported in some instances only by the company, who through the agency of Mr W.H.Chambers take genuine interest in the lives of their people, so that Mr Chambers allegory was by no means a caricature.

Denaby may be said to be the home of colliery ambulance work, and at present boasts the largest village ambulance Corps in existence.

The Corps is about 300 strong, and Mr Chambers, who was always made first aid work his pet enthusiasm, is chief superintendent. He is very proud of the part which Denaby plays in colliery ambulance work, and with a good sure of reason.

The Corps was established in 1883 and is the largest in the number 5 Division of the ambulance league. The division, includes Wath Main, and Hickleton Main Companies and latterly Mitchell Main, has joined. The value of the station and its equipment is £2,400 and the cost of upkeep £750 per year.