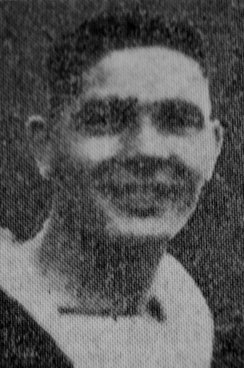 Mr. and Mrs. Fred Adamson, of 27, Tickhill Square, Denaby main, have two sons and also two of their nephews in the conflict.

Corporal Leslie Adamson belongs to the K.O.Y.L.I. and has seen seven years service in India. He returned home a year or two ago and was for a time employed at the local Labour Exchange and then on munition work. At the commencement of hostilities last year he was recalled, and after serving in France was later sent to Norway. A short time ago he was reported missing but his parents have now received the news that he is a prisoner of war in Germany. He was a member of the local tennis club.

His brother, Leading Stoker Edgar Adamson (picture) has eight years service in the Royal Navy to his credit. He has been “in the midst of it, somewhere at sea”, the last news they had of him, he was well and happily carrying on the good work.

Their cousin, Arthur Brown joined the R.A.F. last August and is still training.

Another cousin, Driver Harold Booker, husband of Mrs. Booker, of 93, Firbeck Street, Denaby Main, is in the R.A.S.C. He was called up last November under the military training scheme and is now a motor mechanic in France. He was employed at a Conisborough garage before enlistment.