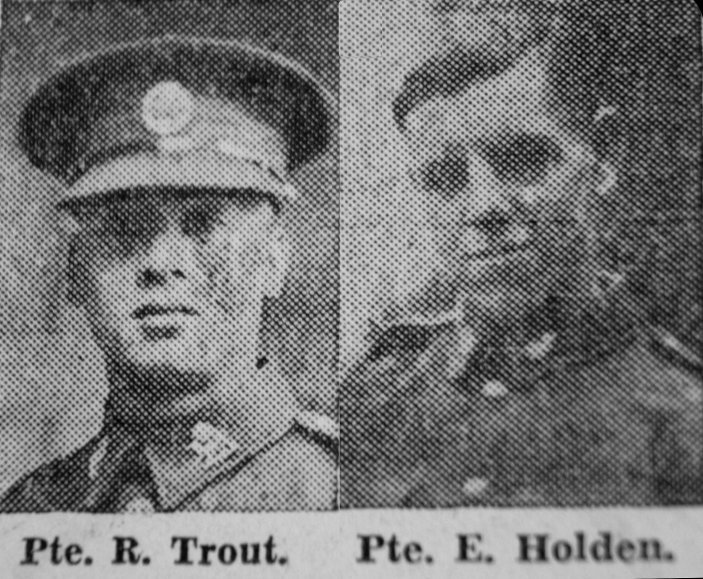 Two young Conisborough soldiers have been reported missing. They are Private Robert Trout, fifth son of Mrs. and the late Mr. Ernest Trout, of 31, Spring Grove and Private Edward Holden, third son of Mr. and the late Mrs. John William Holden, of 22, March Street. It is believed that both men were in Norway.

Mrs. Trout told the “Times” on Wednesday that her son; a reservist, worked before the war at the works of Messrs. Baker and Bessemer, and was serving with the York and Lancaster Regiment. “Some Sheffield lads who were with him in Norway have been over to tell me that Bob and a sergeant were wounded”, she said. “They carried them to a hospital and that was the last they knew. I have read in the newspapers that some nurses and doctors were killed when the Germans bombed a hospital but whether Bob was there I do not know”.

Private Trout, who is 31 and single, comes from a family with a fine military tradition. He has five brothers and all but one, who is married, are serving in the forces. Their father served in the 3 rd Welsh Fusiliers. Private Trout was called up on the outbreak of war.

Private Holden is 22, and is a regular soldier. He enlisted 18 months before hostilities began and was stationed before the war at Strensall. He is serving in the K.O.Y.L.I., and we were told by his sister, Mrs. Johnson, that the family had received no official intimation that it was actually in Norway that he was missing.

Private Holden, a native of Stubshaw Cross, Ashton-in-Makerfield, had lived at Conisborough 15 years and was last home on leave from France for ten Days just before Easter. At one time he played football with Conanby St. AndrewÂ´s junior team.