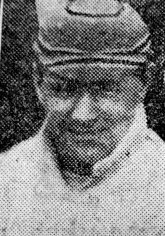 George Worthington, the acting captain of the Denaby team, has had a quiet season with the bat, and it was not until Saturday that he really spread himself, his 72 not out against Rotherham being easily his highest of the season. Since he took over the captaincy he has lowered himself in the batting order, and though this has worked out well for the side, which is George’s first consideration, it has given him fewer opportunties than formerly. He remains however a fine, agressive batsman, bound to get big scores now and then. He is a product of Staffordshire Cricket, and has immensly improved his game since he came to Denaby.