Back in Denaby on Holiday Trip.

“The more education. You have – the more you want.” – Says ex-jockey, cabin boy, stock and, labourer and assistant chef, Lemuel Jones, back home in Denaby this week for a fortnight holiday, just 16 years since he emigrated to America.

LemuelÂ´s father, 70 years old. Mr Benjamin Jones, and his sister and brother-in-law, Mr and Mrs G Porter, of three Alexandra buildings, Denaby are proud of LemuelÂ´s achievement since he left soon after the last war.

In June this year. Lemuel rounded off 10 years of hard work on three nights a week at Rutgers University, near his home in Maplewood, New Jersey, by gaining a bachelors degree in Accounting, with honours.

Lemuel Halls that education is the key to success, and in January next year, he embarks on a business Administration course at the University, aiming to win a MasterÂ´s degree in about five years.

“Like father, like son,” they say, and it’s true for Mr Jones 17-year-old stepson Kenneth has just begun studying for a mathematics degree at the University, where his father has achieved so much.

“The opportunities for advancement are much more over their than they are here,” said Mr Jones at his father’s home on Wednesday.

Mr Jones, accompanied by his wife, Marie, and her parents, Mr and Mrs John F. Neichel, arrived back “home” on Tuesday, after a crossing on the Queen Elizabeth.

“We always talk about England as `homeÂ´ explained Mrs Jones, who has visited Britain on three previous occasions.

Mr and Mrs Neichel were pleased with the clement weather after all they had heard about the notorious English climate.

Mrs Neichel added, “There is much more countryside than I expected”

on Saturday, Mr Jones parents will be host to the visitors at a party in Denaby Church Hall, to which about 100 guests have been invited.

This on Saturday first Lemuel is returning to America; to his job as Education Instruction Manager in the Newark, New jersey office of International Business Machines – and to the `two levelÂ´ house in Maplewood, where he, his wife and her parents live – Mr and Mrs Neichel in the lower half and Mr Mrs Jones the upper section; to the country which are given so much since his days as an apprentice jockey in Fred Darling’s Marlborough stables. 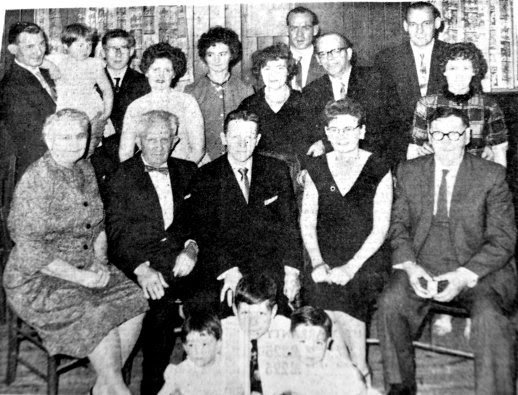 A family group at the party held in the Church Hall, Denaby,

for Lemuel (seated centre) and his wife Marie

On the left are his parents in law, who have come with them

Denaby Jockey will be “biggest” Man on Campus

Back In Conisbrough Rev R. J. Troughton – On Holiday from California