Mr and Mrs Walter Bashforth, 85 Mount Pleasant, Sheffield road, were officially notified on Tuesday that their son, PrivateArthur Bashforth had been killed in action on July 23rd.

Private Bashforth was 24 years of age. He joined Kitchener’s army in October 1914. He was severely wounded in the throat about Whitsuntime 1915, and was invalided home to Warringtonhospital, and it was a long time before he thoroughly recovered.

Private Bashforth was an unassuming personage, yet a keen sportsman, winning the nine stone divisional boxing championship behind the trenches in France, on each of the following dates accounting for his man in the first round in each contests, namely June 9, 10th and 11th 1916.

Whilst training for the championship he was allowed three weeks liberty to roamabout the camp during his preparation by privateWood, late Wellgate, Conisbrough.

We regret to say that he was fatally wounded after having taken part in the earlier and later engagements connected with the present war. 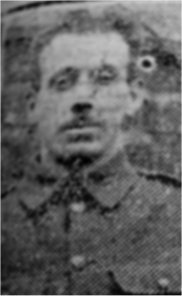