Mrs Smith, the Gatehouse, Denaby, was officially notified last week that her son, Lance Cpl George Beaumont, was killed in action on September 27. 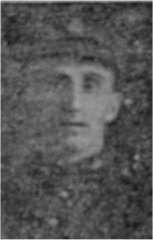 About nine years ago he emigrated to the United States, and was on the staff of a hotel there at the outbreak of war.

He travelled to Canada at his own expense, and join the forces there. He came over to England in the summer of 1917, and went to France in March 1918, when he served until his death.

His brother Sapper C.H.Beaumont (R.E.) has been in France, 30 months. His brother-in-law Private M Killalee is at present on leave. He has been serving in France sinceNovember 1914, and has been twice wounded.

Lance Cpl G Beaumont is the second son Mrs Smith has lost in a year.