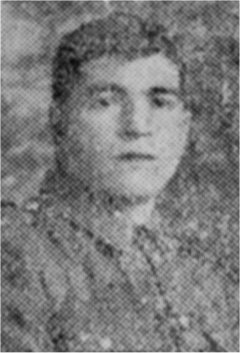 Mr and Mrs Bennett, 30 Don View, Doncaster road, Conisbrough have been informed by the war office that their son Lance Cpl
Alfred Bennett (Staff Regt.) had fallen in action whilst on active service in France.

He was killed on October 26 at the early age of 19 years.

He enlisted in April 1916, and had been in France about four months.

Previous to enlistment he was employed at messes Walker and Crawshaw’s Brick and Tile works, Sheffield road.

He was a regular attender at the Wesleyan school and chapel before enlistment.

His brother is also serving with the colours in France.