An ingenious bombproof shelter, capable of accommodating 30 people in the event of an emergency is nearing completion at Ferry Farm, Conisborough, the depot of the Denaby and Cadeby Home Coal Carting Committee, where the full service of eight lorry drivers have joined at least one branch of A.R.P., and are now busily preparing their own shelter for their wives and children, in order that they will have at least some place of protection should the necessity arise.

The plans for the shelter have been devised by the Chairman of the committee, Mr Tom Hill, a member of the Conisborough Urban District Council, who served from 1917 to the cessation of hostilities in the Great War under Capt Douglas, chief instructor of fortifications at Chatham, London.

Mr Hale told the “Times” on Saturday that he pointed out to the committee that if the necessity arose, the drivers of their vehicles would be needed for A.R.P.work in the district, and would have to leave their families to fend for themselves.

“We decided that this was not good enough for us,” he said, “and so I was given permission to get the scheme underway, and enlisted the help of the workers themselves, who are now slowly completing their task. The excavation work has been completed and the inside of the trench fully concreted. The men are now awaiting the return of suitable weather, so that they can place the top of the roof in position. This will be in, four layers, two of concrete and two of ashes and rubble in alternate layers, the ashes, of course, being designed to act as a shock absorber. The top layer will be concrete so that if there should be a direct hit, the burst would be as much above the surface as possible.

“There will be two entrances, both being air locked doors, divided with rubber cushions and screwing up tight, in the same way as the watertight bulkhead doors of a submarine. We have a compressor in a few yards away from the shelter and it is intended to lead a rubber tube through a small orifice in the door to supply the people in the shelter with sufficient oxygen to last about six hours. The compressed air will serve a dual purpose; as well as supplying oxygen to the shelter it will maintain a pressure inside which will stand as a natural barrier to gas attempting to enter.

“The shelter will be about 4 feet wide, 19 feet long and about 5’6″ in height. To guide against the devastating effect of a direct hit, in which case the explosion, if the shelter had been one long compartment, would have swept through from end to end, the entrances have been placed obliquely to the remainder of the shelter.

The work is being performed slowly because only a few hours each week can be devoted to the task and even that is done in the men’s spare time.”

The wives and families of the men would not have far to go if the warning siren sounded because the shelter is only a few yards away from their homes in Ferry Villas. All the families live in the same block of houses specially built for them by the committee. 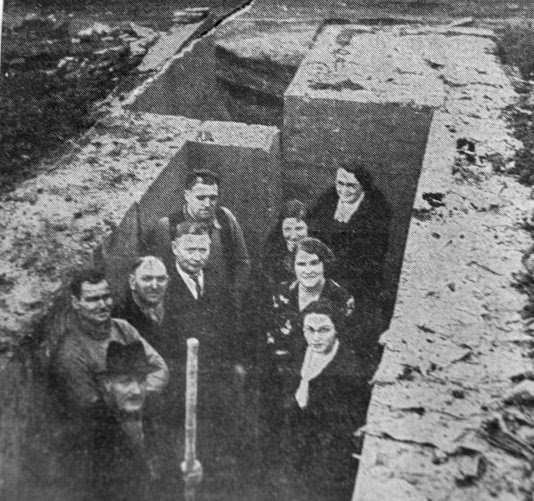 Councillor T.Hill (holding pole) in the Air Raid Shelter he has designed at Conisborough for relatives of employees of the Denaby & Cadeby Home Coal Carting Committee

How To Make An Air Raid Shelter (picture)