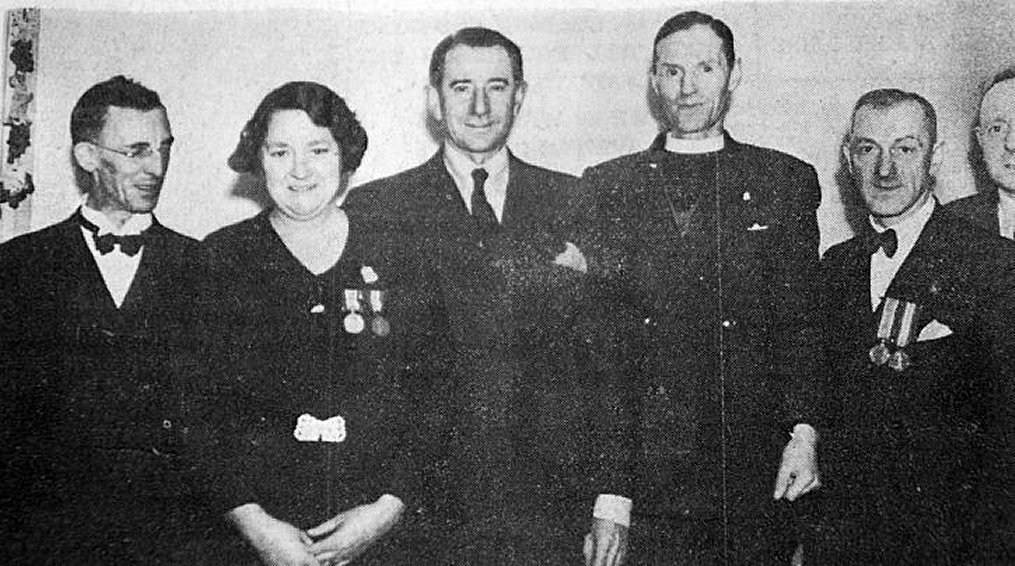 “There is no one to touch ex-servicemen and to let this movement drop just because Adolf has chosen to embroil us in the war would be a very grave mistake” declared Mr. B. H. Pickering, general manager of the Denaby, Cadeby and Maltby Main Collieries and president of the Conisborough branch of the British Legion, when he presided at the annual supper of the branch at the Fox Inn, Conisborough, on Monday.

Mr. Pickering who was proposing the toast of “The King”, said he numbered his best friends among working men and ex-Servicemen and he could not way how much he appreciated being invited to attend the gathering that night. They had among them this evening several men in khaki and many of the old “sweats” would like to have their khaki on again. It was very nice to get down to brass tacks with the old soldiers, knowing what they had all gone through in the last war.

Referring to the activities of the branch during the past year, Mr. Pickering said that the branch membership had increased from 131 to 170 and they had Â£12 10s 6d. in hand and realisable assets amounting to Â£8 19s 3d. making a total of Â£21 9s 9d. Unfortunately the war had interfered with the progress of the building of the new headquarters of the branch. A site had been obtained and a number of workmen had commenced excavations, but they had been held up and the supply of bricks and other building materials had not been forthcoming.

During the year the branch had taken its full share in Legion activities and 25 members had gone to Leeds for the dedication of the West Riding County standards, and four members had visited Paris with the Legion party in August. Poppy Day sales had risen from Â£40 to Â£58 and this increase reflected great credit on the people who were responsible for the organisation and upon the volunteers who had cheerfully placed their services at the disposal of the organisers.

Closer contacts, Mr Pickering said, were being made with the Denaby branch of the Legion and these moves were all to the good.

About 90 members of both the Denaby and Conisborough branches and friends attended and the toast of “Fallen Comrades” proposed by the Vicar of Conisborough, the Rev. H. T,. Eddershaw was drunk in silence and a two minutes silence followed.

The Vicar asked that although they must not forget those who had given their lives in the last conflict they should not forget the lads who were once again giving their lives on the battlefield.

The remaining toast was that of “The Legion”, which was given by the hardworking branch treasurer, Mr. P. Brocklesby, who said that the present war gave the British Legion an opportunity which the members must not miss. The boys who were following in the footsteps of those present should be welcomed to their ranks and offered the same comradeship which only the Legion possessed. With this point in view it was essential that they should get together and take every opportunity to make the young soldiers feel at home.

Reporting upon the members visit to Paris, Mr Brocklesby said that to celebrate the 25 th anniversary of the outbreak of war the French Government invited Legion members to visit Paris from August 4 th to August 7 th . The four members who attended were Messrs. C. J. Pickett, R.D. Blackburn, H. Brocklesby and himself. They had brought back warm memories of an historic occasion: from start to finish, from the champagne greeting at Calais to the valedictory at Blois the warm hearted French had set a pace which whilst testing their middle age, allowed them to respond with vigour. Paris, Versailles and Fontainebleau were set before them after a rousing civic reception at each place. The march to the Arc de Triomphe, headed by the Band of the Coldstream Guards, who had gone over specially for the occasion, was a great success, in spite of the very heavy rain which fell during the ceremony of rekindling the flame at the grave of the Unknown Warrior.

Mr. Brocklesby said he was glad to see members of the Denaby branch present this evening and he hoped that the Conisborough branch would be able to meet them at the Denaby dinner.

The room had been specially decorated with the Royal Colours and the flowers on the tables were afterwards sold for the funds of the Conisborough Urban Council Central Comforts Committee. Coun. G. Oldfield was toastmaster and among the guests were Mr. D Cowburn (agent and manager of Cadeby Main Colliery) and Mrs. R. M. Ross, the only woman member of the branch to see overseas service in the war. One of the men in khaki was Pte. George Moore, of Highfield Road, Conisborough who is again serving and was granted special leave from his regiment so that he might join his old comrades.

The proceedings concluded with a film shown by Mr. Brocklesby of technicolour films made by himself dealing with branch activities during the past year. The show lasted about 20 minutes.