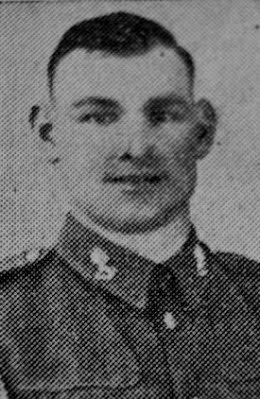 A few weeks ago in our picture gallery we published the photographs of the three sons of Mr. and Mrs. W. Burdett, of 117, Tickhill Street, Denaby Main.

On Tuesday this week the parents received a wire from the Records Office in London to say that their son, Sergeant Frank Burdett of the royal Artillery had died on October 25th  from cardiac failure.

Sergt. Burdett had twelve years service to his credit, eight years in china. He returned for a break about three years ago, when he had about twelve months in this country, and then returned to China. His death has come as a great shock to the family, because Sergt. Burdett was a fine all-round sportsman of fine physique and was the possessor of many trophies won on the sports field.

He was a good swimmer, high diver and oarsman, and he had competed for his regiment in most of these sports.

About four years ago he was joined in China by his youngest brother, Gunner Kenneth Burdett, who is still out there. Periodically Sergt. Burdett wired home, the last his parents received from him being on July 7th, and it read, “Both well, do not worry, letter follows.” The letter has not yet arrived.

Much sympathy will be expressed for the parents, who have both suffered indifferent health for some time and have both recently had serious illnesses from which they are only now recuperating.