70 men escape in jump for safety.

Two runaway cars crashed into a “Paddy mail” train 2000 feet underground at Cadeby Main Colliery yesterday, killing one man and injuring three others, as about 70 more scattered for safety. The accident happened three quarters of a mile from the pit bottom in the Hague Moor seam as men were getting in and out of the train between the night and day shifts.

56 years old ripper, Mr Walter Bellingham, of 95 Clifton Street, Denaby, who had been on night shift, died after being trapped underneath the train, when the two full mine cars rammed the front of the locomotive.

The dead man – known to his workmates as “Jock” – was married, and he and his wife Phoebe at three married daughters, Kathleen, Margaret and Jean

Mr William Cuniffe (Thursday), who helped to free him, said yesterday: “I heard a rumbling just before it happened. The Paddy had just stopped and men were getting out. If they had been on the train it might not have been so bad.”

Mr Cuniffe, a coalface worker, injured his arm in the crash.

As the impact of the crash pushed the train cars along, his belt became hooked onto the last one. He told his father, Mr Bernard Madin, later, that he thought he was thrown clear.

Kenneth, one of four children, was detained in Hospital with chest injuries and was yesterday said to be “comfortable.”

Mr Madin said that his wife and himself were at breakfast when a man called to say there have been an accident and Kenneth was involved. “I went to Mexborough Hospital but the system allow me to see Kenneth for a few minutes,” he added.

“Although days he said he would did not feel too bad and then he tried to explain what had happened,” commented Mr Madin, himself a former coal miner at Cadeby.

After the action the pitch County were used as an emergency medical centre to treat 36 of the men involved for shock. All were later allowed home. The other man taken to Montagu hospital was 27 years old Kenneth Globe of 11, Creswell Road, Swinton, who was treated for back injuries and allowed home later.

Mr Globe, a power loading operation, married with one young girl, told the “South Yorkshire Times” at his home afterwards that the accident occurred at 7 AM when the dayshift was coming on.

“I really cannot say what happened. All we knew was that two mine cars, filled with dirt, came away, hit the diesel and “paddy mail” while men were getting in and out.

“After the impact, things went flying and caused havoc.” 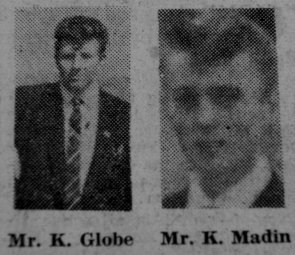 the Fatal Accident at Cadeby colliery