Canada to Conisbrough for an Anniversary.

Mrs Ivy Stott (seated) is seen with her twin sister, Mrs Hazel Huck, 13 Grove Terrace,
Conisbrough and her relatives with the cake made specially for the occasion 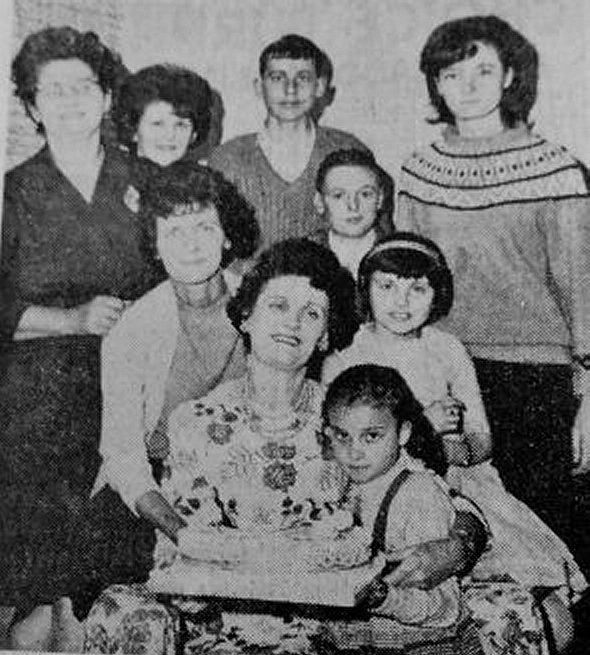 Mrs Ivy Stott will remember a 23rd wedding anniversary for it came at the end of a 6,000 mile journey which brought her back to Conisbrough, her birthplace, just in time for an anniversary day visit to the parish church where she was married.

The journey from Canada ended at Liverpool on Monday, and the following day, the anniversary date, Mrs Stott, sister of Conisbrough Councillor, Mr Albert Tyas, went to St Peter’s church, where she was also baptised and confirmed.

It was 11 years to the day that her husband, Norman, left for Canada, followed some months later, by Mrs Stott. They have lived there ever since – for eight years in Montreal and for the last 2 1/2 in the wilds of Alberta.

But Mrs Stott, whose husband is a field service representative for the giant plane manufacturers Canadaire Ltd found that life at Cold Lake, Alberta, 300 miles from the nearest large city – Edmonton – in a part of the world where the “Natives” take 30° of frost in their stride – wasn’t so bad after all.

In fact, she told the “South Yorkshire Times” on Tuesday, at the Castle Grove Terrace home of their sister, Mrs Hazel Huck, of the “wonderful social life” to be found on the Cold Lake R.C.A.F. base, where her husband works and the air, which the couple live, with their two daughters, Janine (16) and Katrina (5)

It is typical of the kind of pledges. The family have enjoyed “outback” that both daughters are expert skiers and skaters, and the all family have taken a keen interest in square dancing.

Mrs Stott herself as gained for five badges for this “national sport”, which is being known to get his followers out of bed at four o’clock in the morning and even into jail cells to all “dances square” and qualify, respectively for the Idiots Badge and the Gaolbirds badge.

Mrs Stott added, “I’ve travelled the entire length of Canada, and to New York, Chicago and Washington, Bert Montreal really is the most beautiful city. The French influences very strong and the city as charm as well as wonderful new buildings. You have never seen anything so beautiful as the new department stores.

With regular holidays in the picturesque New England states of the American East Coast, Mrs Stott and her husband, who originates from Blackpool, well, well satisfied with life out there, but now they are looking forward to remove this, maybe to Scandinavia perhaps to Europe.

“But Conisbrough will always be home,” Mrs Stott added, and her family have made her homecoming a happy occasion.

Nine of them were at Liverpool to greet Mrs Stott and her daughters when they left the Empress of Canada. Sister, Mrs Kathleen Hannam, born in and married from a house in Castle Grove Terrace, Conisbrough, travelled from Nottingham.

Mrs Stott is now hoping to spend Summer at “home”.

Conisbrough There on a Wonderful Occasion (video)

From Daylands Ave. To Canada