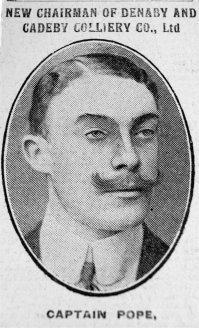 We note with interest the appointment of Captain Morris Pope to the chairmanship of the Denaby and Cadeby Collieries Ltd, in succession to his uncle, the late Mr J Rockingham Pope. Captain Pope is also appointed chairman of the South Yorks Junction Railway Company, in which enterprise the Denaby and Cadeby Company has a bulky interest.

Captain Pope has for some time been spoken of as a “coming man” in commerce, and in this dual appointment he is given a wide and generous scope for his powers.

Reared beneath the mentorship of his brilliant kinsman, the new Chairman may be trusted to continue with judgement the financial and administrative policy which has placed the Denaby and Cadeby pits among the leading commercial undertakings of the country.

We trust that Captain Pope will not confine his interest in the district to his connection with the collieries, but that he will be often seen in the neighbourhood.

His uncle was rather represented here by good works than his personal prescence, but we hope that the gallant captain will manage to combine the two desirable circumstances.