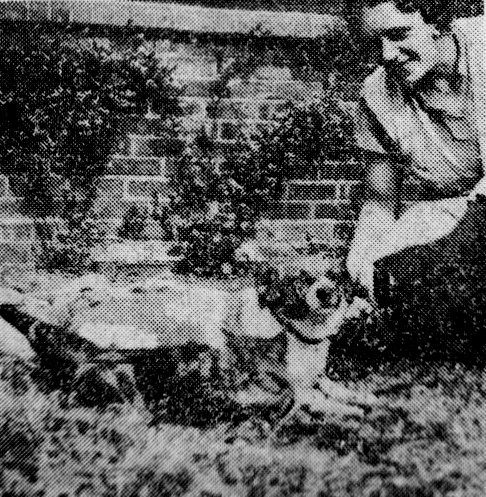 You must have heard the fairytale of the sheep that grow from “lamb hood” at a poultry farm and crowed like a rooster morning, noon and night. Well, at Conisborough, there is a cat that nearly fills the bill. It crunches iron hard dog biscuits, is partial to tomatoes and instead of being silent when it walks,it can be heard moving about the house as easily as a Great Dane.

This direct contradiction to the laws of nature isthe property of Mr Horace Sapey, of St Peter’s Road, Conisborough, a miner at Denaby Main Colliery, and when a “Times” reporter, called at his home this week, Jim (the feline prodigy), was steadfastly eyeing a brace of biscuits, lying on the top shelf of the kitchen cupboard. Jim is grown up from birth with a brown and white smooth Fox terrier, Peter, and they are the greatest of pals.

Mr Sapey told the “Times” reporter (whose arrival was marked by a joyous howl) that the dog was so small when it was a puppy that the friend who brought it to him from Doncaster, was able to carry it in an inside pocket of his jacket. It had to be fed from a spoon for many weeks.

“The cat and a dog grew up together,” said Mr Sapey, “and I have never known them to fight. The dog will sit for hours playing with the cat without so much as nipping it. If he leaves a drop of milk in the saucer and Peter is thirsty, he will always look for permission to drink it, and he will not move unless my wife myself give the word.”

Jim, who was lazily contemplated the glowing fire after his hearty meal, suddenly decided he needed a little toilet time, and lifted his front paws to apply to his face. It was then that the reason for this noisy walking could be seen. He had an extra claw on each foot! “You can hear it running all over the house,” said Mr Sapey, “but I’ve never been able to explain the reason for the additional claw.”

The cat and dog sometimes share their meals with their somewhat lethargic pal – a grey backed tortoise – who rules over a certain corner of the kitchen and deals out death to garden insects and nips unwary cats when they trespass.

The cat and dog, Mr Sapey, said, could not understand the tortoise when it first arrived, when they saw it, move they decided on rough tactics. But the tortoise used to withdraw under its shell and spit defiance from undercover.

“Now, however,” said Mr Sapey, “the torturers get some very well and does his best to amble behind the cat and dog when they are playing. When the dog is taken on his nightly stroll round the houses, the cat walks along behind and keeps him company.”

Mr Sapey’s mother, Mrs J Sapey of Thrybergh Terrace, Denaby, is also very fond of animals, and she asked to’s and two tortoises to keep her company. A goldfish completes the homely zoo.

But that’s not the only record of the separate family – 57-year-old Mr Joseph saidhe worked at Denaby Main Colliery as a Collier in number 228 stall and with himin the same stall work his five sons; Tom, Horace, Jim, Joe and Harold Sapey.

Sagacity of a Newfoundland dog at Conisborough

Brutal Treatment of a Dog at Conisborough