Conisboro’ Fancier Goes in For Rabbits in a Big Way 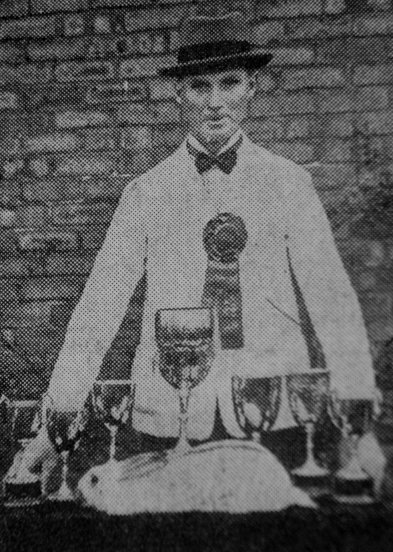 Talk about a rabbit to a farmer-and he will bite your head off. At least most of them will but in Conisborough there is a farmer who regards rabbits as his best. He has the admiration of his fellow fanciers by winning two firsts, two seconds,and won the rabbit section at the great Yorkshire show at Halifax last week.

Its a curious fact that Mr. Adamson is better known in his fancier capacity in places like Southport and Perth, centres of the show world, than he his at home but then that may be because of the honours he has gained in his native Cleveland 11 years ago, when he won more prizes in four seasons than any other fancier in the district.

Ever since he was old enough to appreciate the “points” of the quivering balls of fluff, he has been fascinated with his hobby, but he commenced showing seriously in this part of the world only about two ears ago, when he paid £100 to star his present £150 prize animal. The rabbits are mostly housed in wooden hutches in an extensive outhouse on his small holding and some of the aristocrats in the rabbit world poke their inquisitive noses and blink their black shoe buttoned eyes through the wire netting or run about on an well protected floor.

Mr. Adamson’s sideboard gleans with 30 cups won throughout the length and breath of England, Scotland, and Wales. At a conservative estimate and relying solely upon the prize cards he has kept he has won 150 first prizes and an equal number of seconds and thirds and 200, specials. He also secured many medals and spoons witch make an impressive array. He was the owner of ‘little wally witch’ who was judged the best exhibit at the East national English rabbits club show at Preston. Although wally has passed on he left behind his grand show times.

Our Representative called upon him this week and Mr. Adamson indicated a fluffy little creature which did not seem any different from any one of its fellows, and declared that it was going to win its section at the Northumberland county show. He was right. When our reporter called next day Mr. Adamson told him that it had returned with five first prizes and had a certificate of merit from the British rabbit club.

Mr. Adamson has lived at Conaby for 13 years, and he explained that he had turned his four acres of smallholding from wasteland to good agricultural land which was capable of producing 30 tons of marketable produce in a single year. They averaged between 20 and 30 rabbits up there, and after 6’oclock each evening, when the farm work had been completed, he went up to the hutches and spent the rest of evening looking after his exhibits.

The Art of Showing

“Rabbit showing is as much of an art” he continued as he stroked a pair of long bunny ears. ” as breeding a successful race horse, they dont take up as much room and time but if they are not looked after in the proper way they can deteriorate so quickly that the price you paid can be halved in a few days time.

“like most showing games” he went on “you have to be in at the start when you fancy a rabbit. I telegraphed a man at Bolton one day after seeing what a certain animal had won , and if I had not clinched the deal in that way, I should have lost one of my most promising exhibits. I paid Â£5 for that little fellow over there and I’m hoping that he will pay for himself many times over before he is much older. Immediately after I had bought him, another fancier arrived at the sellers house in quest of the same rabbit!

” We send them all over In portable hutches to Perth and Blackpool and as far south as Sussex. The stationmaster knows our boxes so well that they often enquire how our exhibits have fared.

Theft of Rabbits by Conisborough Miners