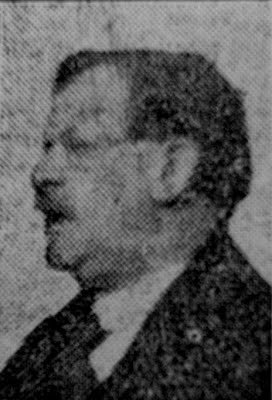 Recently it was decided by the members of the Conisborough Working MenÂ´s Co-operative Society Ltd., that presentations should be made to the manager, Mr. Irad Webster, and to the secretary, Mr. Fred Fisher, to commemorate the attainment of their “majorities” in the service of the society. A committee was formed, and a goodly sum was realised. On Thursday evening a concert was held in the Baptist School at which Mr. E. Mee, the societyÂ´s president was chairman, and at intervals in the programme the presentations were made.

Mrs. S Brown was first asked by the President to hand to Mr. Webster a wallet inscribed with initials and containing 80 per cent of the donations on Treasury notes; and an illuminated address. She said it was a pleasing duty to present these to the esteemed manager, who had been obliging to the customers, and conscientious in his duty.

Mr. E. Moore said that in Mr. Webster the Society had the right man in the right place and he hoped to see another presentation in another twenty-one years.
Mr Irad Webster
Mrs. Brown then handed the wallet and the address to Mr. Webster.

In accepting the tokens, Mr. Webster said he hoped that he would continue, with the help of the members, to keep up the success of the society. He quoted a few interesting facts to demonstrate the growth of the firm. In January 1901, the shop was opened with 25 members. Now there were 655. The original takings were just over Â£20 per week, and now they averaged about Â£400. The reserve find is now more than half the share capital. He concluded by saying that though that meeting might not have the approval of every member, it was pleasing to the majority, and looking all round he was more than confident that the result of it would be beneficial to all the members.

Later on in the evening, a similar presentation was made by Mrs. Chadney to the Secretary, Mr. Fred Fisher. She was supported by Mr. E. Burton, who stated that the balance-sheets were sufficient evidence of the successful working of the Society. Mrs. Chadney handed to Mr. Fisher a similar wallet to that handed to Mr. Webster, but containing 20 per cent of the subscriptions, and an identical illuminated address. Here it might be mentioned that these addresses were most articulate and were the work of Mr. Frank Piper, of Conisborough. Mr. Fisher said that it was very nice to think that after 20 years his services were acknowledged. He described the meeting held at the Board School at which the society was formed, and told how the committee meetings were held at members houses on of those being the house of Mr. G.H. Hirst , now M.P. for Wentworth, than of Conisborough.

He stated that a further meeting in “BrocklesbyÂ´s Rooms” decided to engage Mr. Webster as manager, and he thought they chose well. He recalled the prediction of the president of a rival Society who foretold the fall of the new co-operative society like a pack of cards, but instead it was in a very healthy condition.