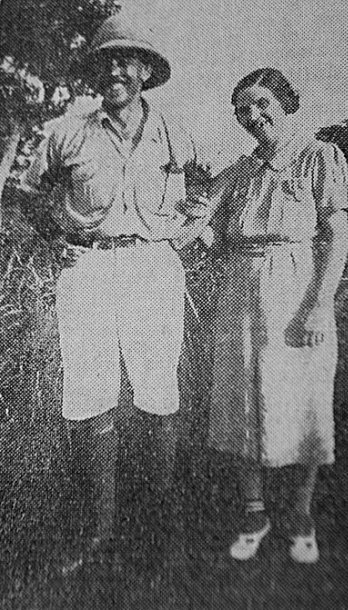 A former Conisborough man Mr. R. B. Lamb, late of 1, Cadeby Avenue, Conanby, and at present in the Geological Survey Department, Yendi, Northern Territories, Gold Coast, West Africa, has sent us an interesting account of conditions out there. He puts a different complexion on points referring to this part of Africa mentioned in a recent article in our columns.

“A short while ago my attention was drawn to an article in your paper describing a young Conisborough wifeÂ´s last minute rush to complete her shopping in preparation for a journey to join her husband in Africa. A journey of some hundreds of milesÂ´ by rail is impossible out here as the line only runs from Takoradi – the port of disembarkation- to Kumasi, the railhead – a distance of 190 miles only.

“I have still to experience the `terrific heatÂ´ mentioned. I am much farther north than Konongo, and the temperature here is as much as ten degrees higher than anywhere in the Colony, and yet, although I have been here right through the hottest part of the year the temperature has not reached 100 degrees. The usual thing is 85-90 degrees. As for children not being allowed in the country, there is one here in the Station; a boy two years of age, born in the Colony at Agogo, a few miles from Conongo. There are two further north at Borku and one in Tamale – all born out here.

“White Man´s Grave” is a phase of the past and cannot in any way apply to-day. Why do not people realise that the percentage of deaths among the white population of the West Coast of Africa is much less than the percentage of deaths among the people at home. It is admitted that people are subject to malaria and other tropical fevers here; but at the same time we do not get `fluÂ´ and various other ailments to which the people at home are subject.

“The life out here is good and healthy with plenty of sport of a kind which cannot be had at home. My wife is out here with me (she came out a few weeks in front of Mrs. Hadfield), and quite enjoys it, although she could never stick the summer weather at home – when there was any. We are 300 miles north of Kumasi, and I have visited people who have never seen a white man before and usually run from their villages when they see me coming. Some of them wear no clothes at all, and in support of this statement I am enclosing a snap of a Koncomba woman with my wife standing by her side. This was taken at Zabiri on the White Volta River, 320 miles from Kumasi and the railhead.

“These people are lively, nice and friendly and are always cheerful. I employ a lot of the men as casual labour at 4d. per day. They consider themselves very wealthy when they draw a salary of 10s at the end of the month.

“I am prepared to show cinema pictures of the people and the country on my return to Conisborough in March next year in support of my statements”.