Conisborough Youth Builds His Own Planes 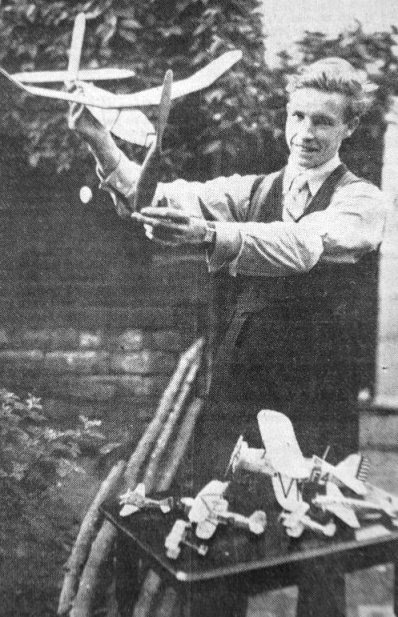 In these modern days the career of an air pilot seems to have superseded that of the fireman and engine-driver in the hearts of the young, and like every other boy Ernest Bramhall, of Calder Terrace, Conisborough, wished with all his heart when he watched a plane soar overhead that he could be a pilot, but they donÂ´t have pilots at 10 years of age and so Ernest compromised by using his motherÂ´s broomstick as a joy-stick while he, too, roared away above the clouds.

That was years ago, but to-day Ernest is more air-minded that ever, but he is now more practical and he is able to appreciate the symmetry and the beauty of flight. He has devoured articles and magazines devoted to flying and although he had then never been in a plane he could reel off the list of “innards” of all the well known makes and had already pictured himself at the controls.

Reading was not enough for Ernest however, he wanted to be doing and “I determined to create my own planes” he told a “Times” reporter this week as he laboriously fashioned a minute part for his latest model “I hit upon the idea of making my own planes – in miniature” he added “I determined that when I had finished with a model it would be an exact replica of the plane it represented”.

He carried out his wish and in the last three years has built 30 models in all, carving the microscopic parts with a broken razor blade from balsa wood.

Ernest spent plenty of time on his models and when he had finished they were so perfect that anyone with any knowledge of aircraft could pick out the particular make at a glance. So splendidly proportioned, so minute in detail are the fragile little planes, that that when Ernest took a picture of one of his models on the ground a friend at the Doncaster airport marvelled “that a plane like that should make a perfect landing in such bad country”. Ernest chuckled – the “bush” his friend spoke of happened to be the blades of grass surrounding his model as it lay on the ground and the “boulders” round it were tiny pieces of stone. But on the photograph of course, it looked very much as if the grass and stones were almost as big as the plane, and the real life effect was added to by the perfect detail of the plane.

Ernest is not satisfied with planes, tail and fuselage. He goes in for movable ailerons and rear fins and insists on adding each valve and cylinder separately to his radial-engined models. He gets a length of black cotton round a match stick and cutting the stick into tiny pieces which are then stuck on to the “cylinder head”.

“In one model alone” Ernest modestly confided “measuring about four inches by 31 inches there are 64 parts. It is a model of a Camel plane, used chiefly during the war, and there are 20 pieces of wire, three pins, eight struts, nine separate sections to the landing gear, two pieces to the wing and fifteen pieces in the fuselage or body of the model. ItÂ´s some job I can tell you. All the pieces are “doped” (although mother complains about the odour of pear drops), and the parts are then glued to the body in turn”

“My first model contrary to expectations turned out all right, and you can imagine my feelings when it stayed one minute in the air. It was a war-time spad model. 15 inches long, powered with a strong rubber motor, but unfortunately it had a forced landing after a time. Those war-time engines were notoriously unreliable, so the engine failure was in perfect keeping with the desire for detail”

When vacancies were announced for the Civil Air Guard. Ernest jumped at the chance of handling the controls of a real craft for once, and his weekly fights have come to be the happiest moments in his life. His mother knows the throb of his engine as he circles over his home and she always gives him a wave in reply.

But with plenty of opportunity to study and work on real planes, Ernest never lost his love for his beautiful models at home, and now that he is temporarily unemployed he finds plenty of time to fashion his creations. American magazines furnish him with plenty of plans, but they are mostly of obsolete types, and building his models to scale is becoming increasingly difficult. Perhaps it would not be in the interest of the nation for latest models to be used for copying by members of the general public.

“All I use when I am making my models is a pair of tweezers, like those lady hairdressers use, sandpaper, a ruler and a broken razor blade”, Earnest said, “and strange to say it is the smaller models which are the hardest to make. “Taking-in” at a glassworks (he works at Messrs. Dale BrownÂ´s, Swinton), is not the best work for leaving you with soft hands, and it is sometimes very awkward to add parts to the little machines without disturbing other sections which may have taken weeks to place in the right spot.

“Some of the models have movable controls and some have fixed, but all of them are as near perfect as I have been able to get them, especially the small models. They have to be very carefully handled”.

His latest model is a 14-cylinder radial-engined Armstrong – Whitworth “Atlas” plane, and when it is completed it will have a wing span of 6 Â½ inches. “It will be an exact model of that picture in the book”, explained Ernest as he worked with his razor blade, and added “I hope”.

One slight slip with the keen blade and the work of hours would be ruined – but his hand does not slip and one more plane is fashioned as slowly but as surely as its big brother is being fashioned in the most up-to-date Â£1,000,000 aircraft shop.