Mr C.ARowe, presided over the annual meeting of the Conisbrough cricket club, held on Tuesday night, in the Eagle and Child Hotel.

There was a fairly representative attendance.

The secretary (Mr D.C.Grahame), in presenting his annual report, stated that the teams were playing exceptionally well up to halfway through the season, and should have won the South Yorkshire league if the team as a whole had been triers, but unfortunately they had been troubled with those whose temperament made them ill fitted to be playing members of any cricket team. Cricket generally would be better served without them.

It was worthy of congratulation that 50 of the club’s members, equal to 20% of its membership, had, since the beginning of the war, joined H.M’s forces. We could assure them that he felt justly proud to be associated with a club which sent so many of its members to serve their country.

There had been a lot of controversy about the playing of League cricket this season, on account of the war, but he saw no reason why those whose duty it was, or whom circumstances demanded to stay at home, should have to hide themselves in a “dugout” on a Saturday afternoon. The speaker thought that they should play the game where possible.

They would see from the balance sheet that the balance in the bank was £11 1s 4 1/2d, which was a very gratifying feature, especially so when they took into consideration the fact that they had £21 still outstanding. The secretary stated that there were a great many members who had not yet paid their last year’s subscriptions. He thought that the man who was so far devoid of principle as to shirk paying his subscription, after being admitted to all the principles to which membership entitle him, should be made to understand that the club would be well rid of him.

He moved a resolution that “no member shall be admitted to the privileges of membership until he or she has either paid the whole or part of the subs.”Needless to say it behoved them to use much forethought in their expenditure next season, because the club’s finances were bound to be considerably affected, and they would have to husband their resources as much as they possibly could. The report was adopted 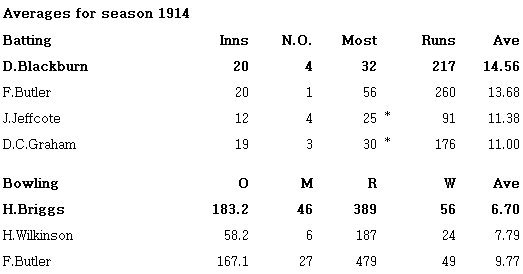