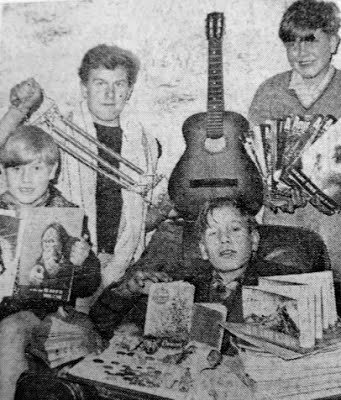 Collecting is a hobby that the Pratt family of 11 Leslie Avenue, on Conisbrough’s Conanby estate, take very seriously, and there can be few families whose enthusiasm has led them to gather such a wide variety of specimens.

From animal skulls and rare coins to stuffed birds and encyclopaedias – they have all at one time or another come under the eagle eye of Mr Walter Pratt and his family, especially two of his seven sons, 12 years old Stephen and 14 years old, Gary, both pupils of Conisbrough Northcliffe County High School.

One of Stephen’s present collection is of animal skulls. It includes those of fox, sheep, hare, rabbit, rat and sparrow. In fact, Stephen is a keen naturalist and last year when a private school for the largest collection of wildflowers. So keen is he that is considering taking up taxidermy as a career when he leaves school.

But not all his collections are quite as unusual as this one. He also has quite a number of following coins, including examples from Italy, Holland, Belgium, New Zealand, China, Japan, Spain, Malaya and Hong Kong.

Stephen told our reporter, “some of them we found in mud at the Three Lakes, Ravenfield. They were German and French and we figured they may have been dropped by prisoners of war, near there in the last war.”

“He’ll collect anything he can get his hands on,” said Stephen’s mother, Mrs Teresa Pratt, “and his brother Gary is as bad.”

“There is a chest in his sroom simply full of his collections, including a great pile of encyclopaedias. It’s so heavy you would think there were a couple of bodies in it,” she added.

“It must be in the blood” agreed her husband Mr Walter Pratt, who collected many of Stephen’s coins during his Middle and For East War service with the West Yorkshire Regiment.

He remembers exchanging two goats and a German Mauser pistol for a stamp collection, which contained “just about every stamp in the world”. It later fetched Â£29 from another interested party.

Mr Pratt´s uncle, the late Mr John Cocksedge, of Conisbrough, was another family member with a similar hobby. He collected butterflies, beetles and even stuffed birds, which seems to suggest that this fascinating weakness really is “in the blood.”