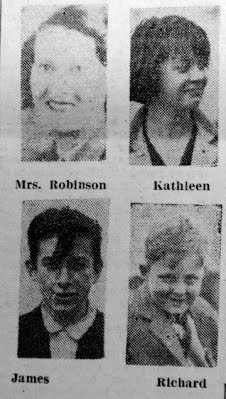 Neighbours were praised this week by a Conisbrough miner and his family, who fought for half an hour in the early hours of Sunday morning to save their home from destruction by fire.

With friends and neighbours, Mr Richard Robinson and his sons, James (18), Keith (16) and Richard (13), sprayed water from four garden hosepipes onto the blazing furniture in the living room of their Pope Avenue home on the Conanby estate. Finally they put out the flames as fireman from Mexborough, Conisbrough and Brampton came to their aid, but not before Â£500 worth of recently completed improvements to their NCB honed, semi-detached house had been ruined.

“I just don’t know where I am going to turn,” Mr Robinson’s wife, Kathleen, told the “South Yorkshire Times” on Wednesday.

“We weren’t insured against fire and we’ve lost every stick of furniture and thread of clothing that was in the room.”

Other neighbour she said, “Considering that we have only lived up here since September they have helped us splendidly.”

Beside ravaging the living room – devouring the three-piece suite, the side board, wall-to-wall carpeting, table, television and radio – the fire scorched freshly painted ceiling and newly decorated walls throughout the house. The heat even cracked the living room fireplace, and metal window frames.

Since Sunday NCB workmen had been repairing the devastated room.

As yet there is no real clue as to what started the blaze. It was discovered when the smell of smoke woke Mrs Robinson, and she then glanced across the street to see the flames reflected from the house opposite.

The couple walked their three sons and 16 years old daughter Kathleen, and together made their way downstairs.

“If we had been upstairs another five or 10 minuts we could have been trapped” said 45 years old. Mr Robinson. “The flames were up to the ceiling by that time.”

Miss Robinson denies that a lighted cigarette end could have kindled the flames. “There are four ashtrays in the room and they are all kept safe on the metal mantelpiece, or on windowsills,” he said.

“We always move furniture well back from the fire, when we go to bed, but I think a piece of dross in the coal must have exploded. This has happened a number of times with coal from my present load.” He added.

Conisbrough Family Fought Fire On their Own – Turned Budgie Black