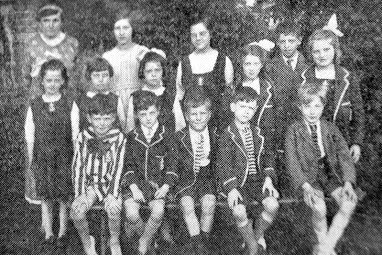 The sports were arranged to take place on Thursday, July 19, but, alas, words, fail us to describe the weather. So many parents and friends, however, braved the downpour that an impromptu concert was speedily involved.

As the items were arranged on the spur of the moment they proved not only the wonderful memories of the various pupils who took part in it (not one being omitted from the program), but also, the variety, quantity – and, above all, quality of the subjects taught in this school. These would avail nothing were it not for the painstaking care with which they are evidently taught. The interval was pleasantly passed in partaking by all of a bountiful tea.

The program was continued – and after “God Save the King” the children joyfully returned to their feast. As an outsider, what struck once more, perhaps, than anything out was the happiness of the children and the complete confidence with which they evidently regarded their “heads”.

It was more like the “home” of a huge family than oneÂ´s usual idea of the ordinary school – but a “home” rule with loving discipline. One could, of course, pick out those who shone conspicuously, but it would be invidious to make comparisons when all did well.

The following day, in ideal weather, the sports took place, followed by another “feast!” I fear the children will vote next year for a wet day,followed by a fine one.

The prizes were distributed by Mr Rance, of St MargaretÂ´s vicarage, Leytonstone.