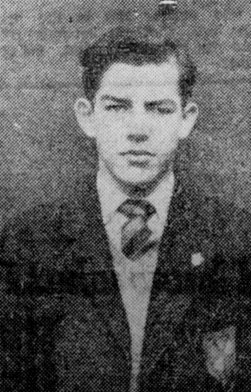 A freestyler until he went to the college last year, he was allowed to swim in the championship because he is now a resident in the County. The man he beat into second place – Richard Phelps – has held the title for the past four years, and the two will meet again over the same distance at the Western Counties Championship at Exmouth in August.

Kenneth, the son of Mr and Mrs Stanley Brandreth 3, Roberts Avenue, Conisbrough, is a former member of Denaby and Conisbrough, A.S.C. where he did all his swimming before moving to Cheltenham. All this family are members too – his sister Shirley has represented the Yorkshire schools – and they were all there on Saturday to cheer him on.

As well, as swimming for the college, Kenneth is a member of Cheltenham Swimming Clubs medley relay team along with another St Paul’s student Bob Thomas, who won the 110 yards backstroke title on Saturday, and two other members of the club.

Already they have won their way to the Gloucestershire County Championships for that event, which will be decided in the near future.