History of the Beginning of Conisborough United Brass Band 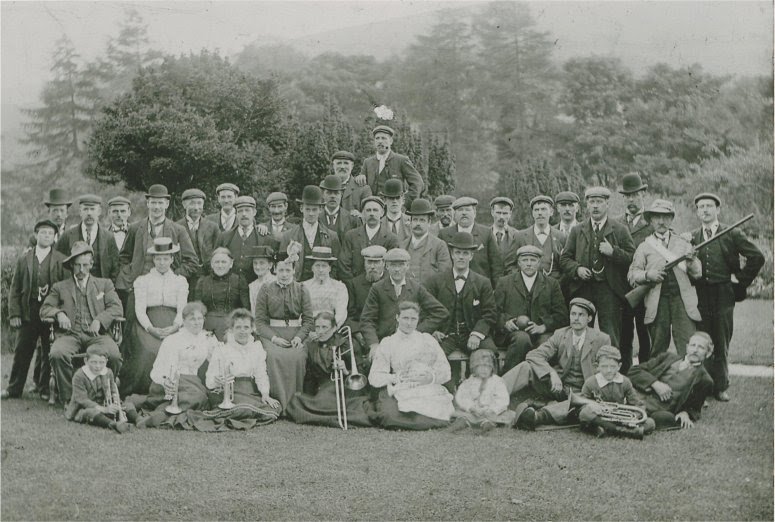 Conisbrough Brass Band on one of the outings. George Lewis, who wrote this history is at the top. Mary Ann Addy (Lewis) of Wickersley is on the left of the front row At the request of several members of the band in 1920, I – George Lewis was asked to give a history of the bond as near as possible. My father William Lewis joined the band first in 1884 then I joined in 1885

The earliest band practices I remember were held in the Church School by kind permission of the then Vicar (the Rev. J. G. Wood) The band then moved to a room over the saddle house in the Priory yard by kind permission of a Mr Little the owner. He was no mean performer on the pocket cornet. He also experimented with electricity and had a light over the front door and also for the band. After the removal of this gentleman from Conisborough the band moved again to a room near the Eagle and Child Inn. A Mr G. Addy was the landlord of the inn. The room is now however under the ownership of a Mr Roberts and used as an auction room. Practices were held weekly on Monday and Wednesday evenings – the entrance fee to join was 5 shillings and a contribution of 3 pence a week was made by each member. (Nearly all members were able to buy their own instruments except for the basses and drums.)

Subsequently, the band removed to the Red Lion Inn where the landlord was a Mr J Shutt. During the summer practices were held occasionally on Sunday mornings in the Croft. There were also Saturday parades and concerts held in the Board Schools and Smoking Concerts to raise funds to purchase other instruments. During the 1880s the band played at The Red Lion inn and accompanied the Oddfellows to church on their anniversaries and also for their sports and for flower and other shows. 1887 and 1897 saw them playing for the Jubilees of Queen Victoria. In 1886 the band played at the military funeral of the late T. Ainsley then later the funeral service of Queen Victoria. The band also played at several benefit parades to raise money for the wives, children and widows of war soldiers and sailors during the South African Boer war 1899 to 1901.

About This time a `Fox Inn Picnic Society’ was formed by a Mr John B Gibson who was the landlord. When the band was asked to help I believe Mr F Fisher was appointed secretary and it was he who arranged some glorious outings to various places in Derbyshire via Sheffield costing about 6 or 7 shillings including lunch, a knife and fork tea, charabanc and rail fares!

The band and party are to meet at The Fox Inn at 7.30 and then gather at Conisborough station at 7.58. The train will then leave Sheffield Victoria Station by coach for Castleton calling in at places of interest on the way. Tea will be provided at The Bulls Head at 3.30pm then we will be returning from Castleford at 6pm. Finally, the train will leave Victoria station at 11.15pm

Total 6s 9d These outings were so popular that the committee decided to restrict the number to those members of minimum one year standing. The outings were continued under the patronage of Mrs Gibson and Mrs J Crossland. During Mrs Gibson’s time a banner was presented to the band for use on such picnics, also a miniature barrel was presented to Mr Saville for use on these picnics. Other band trips were made to Pontefract, Retford, Blythe and Bracebridge. But these visits were at a much later period sometime during the 1890s and 1900s.

In early times the band was called to perform at all the surrounding villages including Doncaster at the annual hospital demonstration and this was free until Mr Wilson was informed that certain bands were paid for their services -at that the band asked for a ten shilling refreshment fee!

The band had engagements for garden parties at Crookhill Hall, Melton Hall and several others also picnic parties also they went by boat to Sprotboro.

During the 1898 or 1899 the band was turned into a subscription band Fitzgeorge Treasurer and G. Lewis secretary with a working committee to help. This however was an unsettled time for The band.

A Rule Book then came into existence and shortly after the band lost some of its players and was `in the low water mark’. Then it was reorganised under the leadership of the deputy bandmaster G. Lewis and W. Burton was appointed secretary. Mr C. Kilner J.P. became president.

At this time the band was supported by Mr H.L. Smethhurst and a very good committee behind him. During The year 1906 Mr Wilson was presented with thanks an inscribed gold watch.

During the trip to Bracebridge the band presented Mr G. Lewis with a baton.

During The 1921 and 1926 strikes the band was in good form and Mr George Lewis was congratulated on having such a good band .The band played at the miners demonstrations and for dancing in the castle grounds before the lodge was built and also played when King George V and Queen Mary visited the castle in 1912.

During the 1926 coal strike the band had a Saturday afternoon trip to Blythe.

Now the band is defunct owing to a lot of the players begging to go to make the new Denaby Band.

The Fruits of Leaving the Teetotal Band