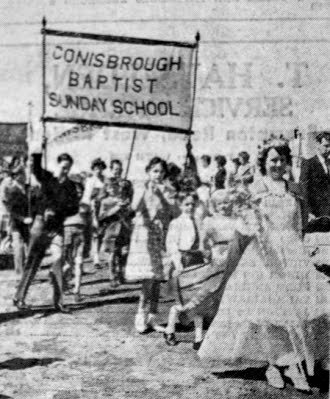 The United Conisbrough Sunday Schools, held Their Whitsuntide Procession on Monday. The scholars and teachers assembled in the Welfare grounds in the afternoon and made their way to the Castle grounds, led by the Parish Church Choir.

The Reverent C. Keogan, Baptist Minister, presided at the service in the Castle Grounds, watched by many spectators and an address was given by the Methodist Minister, the reverent D.H. McDonald.

The children later had tea in the Church Hall, and then returned to the Welfare Grounds for games.

A separate tea was held for the the School Leaders, Members of the Church Council and Friends.

Miss Annie Stenton, aged 74, was among those attending the festival as she has done for many years, since she began Sunday school teaching.

Whitsun at the Churches