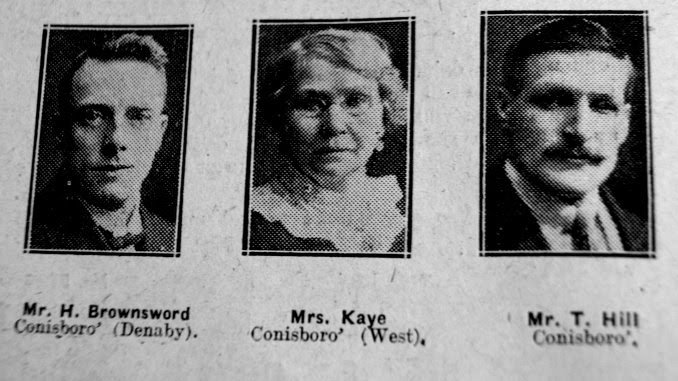 In the Conisborough urban district the total number of votes recorded was 2984, of which the Labour Party claimed 1512, the other parties 1472. The poll was about fifty per cent.

There was very little enthusiasm or excitement. Some of the results were rather surprising. Labour anticipated a clean sweep of the wards, placing their strongest candidates where the hardest fights would be, but they underestimated their strength.

Perhaps the most astonishing result was the heavy defeat of Father Leteux by such a majority. The most sanguine Labour men must have had misgivings regarding the North Ward. Mr. Hill must feel proud of his achievement for at the two previous elections he was rejected by the East and South Wards respectively.

There was a great contest in the South Ward, and the fact that Mr. J. Drabble, whose first incursion into public life this was, has defeated a candidate with sixteen years service, points to a tremendous amount of hard work in the organising and canvassing line, for Mr. Drabble held no meetings, whilst Mr. Urch addressed two in Conisborough.

Turning to the East Ward, we find Mr. Norwood beating Mr. A. Roberts, our W.R.C.C. representative by 119 votes. Mr. NorwoodÂ´s personality and fearless speeches on council matters, coupled with the fact that many persons must have had the idea that Mr. Roberts had enough public duties, probably secured his return. In this ward, Labour registered its lowest total votes.

Looking at the West Ward result, the conclusion one arrives at is that sentiment might have had a lot to do with the result on the one side, whereas apathy on the other, led to undoing, and the lesson to be learned is that at election address and a name are not enough now-a-days. Coming to the Denaby Ward, we find the retiring member beaten by a majority of 13 votes on a poll of 623. Last year 808 persons recorded votes in this ward, and Mr. SheltonÂ´s majority was 40.

Prior to the election of Saturday, Labour had three representatives on the Council, now they have five. At the last election, only one retiring member was defeated, this time three, each with two years service, have been passed over, and with a new member filling the casual vacancy, there will be four new faces at the next Council meeting.

The detailed results appended, were declared by the Returning Officer, Mr. H. M. Marshall, about nine oÂ´clock, the count having been expeditious.

After the declaration, most of the candidates addressed the small crowd assembled outside the Church Hall, Coun. W. W. Norwood proposed a vote of thanks to the Returning Officer.

In seconding, Mr. A. Roberts stated that he would rather have had Mr. Norwood congratulating him, but the result would in no wise interfere with the former friendly relations. Mr. Roberts added that it was the number of electors who did not turn up to vote, who defeated candidates like himself.

Coun. T. Hill stated that he would endeavour to carry out his promises in his programme. The first consideration was the reform of housing conditions, with an economic policy.

Mrs. Kaye said she had not much time let to live, but believing that the Labour policy was the only one to redeem the world, she would support it.

Mr. H. Brownsword then provided a touch of humour. He said “You may not know me, my name is Brownsword and I have just been elected for Denaby Ward. He told us how delightful it was to be a successful candidate, and he looked the part.

Mr. Jos. Drabble stated that he was proud to be elected the representative of the South Ward, and that the electors could rest assured that the confidence reposed in him had not been misplaced. He would do his best for the community. Mr. S. C. Urch stated that he was not downhearted, his party had gained three seats and lost one, whilst they had recorded more votes that the other parties.

Speaking after the declaration, the chairman of Mr. DrabbleÂ´s committee made a telling speech on the situation regarding the two Conisbrough Wards. He said, “I consider that we have won to-day the greatest victory in the whole area. From the moment of his adoption, Mr. Drabble has spared no effort to secure victory”. He has had a band of workers which has copied his example. He has been opposed by the very strongest candidate Labour could put in the field, and his success is the result of enthusiastic work. If I may be permitted to over step the bounds of our own ward, I should like to offer my congratulations to Mr. Norwood. Some of your regard this result as astounding. I do not.

Mr. NorwoodÂ´s large majority, in my opinion, is due to two causes, his personal popularity, and the overwhelming ambition of his opponent. Mr. Roberts is a gentleman of great ability, the possessor of a charm of manner, which will make him friends wherever he goes, yet there is no party so destitute of men of capacity that it need trust so many of its interests to the care of one individual. It is the recognition of this fact that has led many to-day, to vote for Mr. Norwood. Do not tell me that the Labour strength of the East Ward is represented by 203 votes.

In an immortal line Shakespeare said, “Cromwell, I charge thee, fling away ambition”. Now ambition is a desirable quality in any individual, but one can be over ambitious. There was once a cry dear to the hearts of the Labour men, `one man, one jobÂ´, but there are exceptions to every rule. I know something of the onerous nature of the duties appertaining to membership of the County Council. No man, with the best intentions in the world, can sit on all and sundry public authorities and do justice to all the positions.”