Chief match of the Denaby Festival week commenced on Wednesday and was spoiled by a sudden and disappointing reversion to the ghastly weather conditions of July.

Wednesday and Thursday had been reserved for a visit from Mr G.S.Marples Derbyshire team. Mr Marple brought a very representative side, to which was opposed 15 players of the Denaby district. The home side included the bulk of the Denaby and Cadeby team, with Alban Turner (Hickleton Main), E.Glennon (Thorncliffe, formerly of Denaby) and one or two other neighbouring players.

Mr H.W.Smith won the toss, and the district team took first knock on a wicket which was a triumph of the groundsman´s art.

Arthur Robinson and Alban Turner opened to the bowling of Mr Lawton and Morton, and later Cadman, Wright and Storer were tried, without much success. Elliott, the youngsterwho hassucceeded Joe Humphries, was the wicketkeeper, and Joe employed his leisure in the “country.”

Down from the first, the Denaby batsmen played the bowling with confidence, though Turner was, as is now usual with him, careful unrestrained in his opening, leaving Robinson to set the pace and measure the boundaries All the bowling was alike to the batsmen, however, and was gradually made to look cheap. The score stood at 82 whenStorer came on at the tennis courtsend and got Robinson’s wicket with his first ball, a full volley which the batsmen attempted to drive, and only succeeded in returning hot and low. Robinsonhad playedbright cricket for 42, and seemed to be well on the way to big innings when he was undone by a bad stroke to a bad ball. 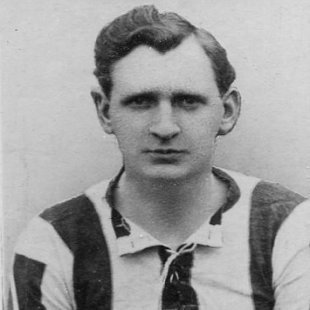 Teddy Glennon (picture) came in, and opened with three beautiful fours and a six. He hit bristly and cleanly all round the wicket, and did not hesitate to go out for the bowling, much of which asked for what he gave it. Turner’s pace beganto improve but he mistimed frequently on the leg side. Within 15 minutes Glennon was in the 40s, and it looked as a he would reach his 50 before Turner, who had now being at the crease an hour and a half. They stood 48 all and Glennon missed a chance on the leg side. In the next over Turner reached his 50 with a late cut for two, and signalled his satisfaction with an off drive for four. The drizzle of the past half-hour now developed into a steady downpour, which drove the players off.

Play was resumed shortly after four o´clock, and Alvin Turner almost immediately lost his wicket to Mr Lawton, for a soundly played 58. Glennon (84) went on merrily, however, and Narroway, did not stay with him long, and it looked all odds-on a century from the footballer until Cadman took him smartly as he was attempting to drive Lawton. Worthing and Luther Robinson went fairly cheaply, but Fisher (Brodsworth), and Tom Thorpe (Kilnhurst) had played themselves comfortably in when the rain came heavily again at 6.30, and play was abandoned for the day, with the district team standing 289 for 6, ready at any time for a declaration.

Fortunately, the rain kept off yesterday (Thursday) and the weather looks quite promising when Fisher and Thorpe resumed with the bat. The score was quickly increased to 329, at which figure the innings was declared closed.

The Derbyshire side to the wicket about 2.30 and made a poor commencement in their attempt to rub off Denaby´s formidable total. Lawton, Cadman and Humphries, the latter of whom was run out in an endeavour to snatch a second, having raised only 11 runs between them. Southern and Morton made something like a stand, and Malthouse played a very careful innings, eventually carrying out his bat with the score of 40. Wilson was in excellent form with the ball and took five wickets for 56. Stumps were drawn about six o´clock.