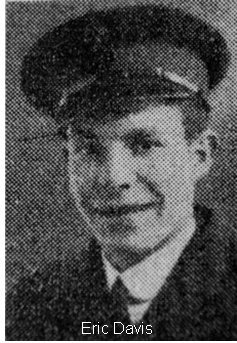 Two brothers, one in the army and the other in the Navy, are Lance Bombardier Norman Davis and Engine Room Artificer Eric Davis, second and third son, respectively of Mr and Mrs Arthur H Davis, of 44, Old Road, Conisborough.

Mr Davis is a former financial secretary for many years, of Denaby United Football Club, and the “Times”is sentevery week to the two of them, and Eric has written home stating that he expects that he will be seen in the paper as “The Battling Brothers. Wehave obliged!

E. R. A Davis, who is 21, joined the Navy on February 5, after 6 1/2 years at the Doncaster, LN.E.R. plant works, and was home on leave in May for his 21st birthday. He attended lecturesat Doncaster Technical College before the war and gained his HNMEC with endorsement.

Lance bombardier Norman Davis is 23 and for nine years he was employed in the offices of the Amalgamated Denaby Collieries Ltd; he was attached to the Time office DenabyMain Colliery, and also during the past two years fulfilled duties in the managerÂ´s office at the pit.

Both the brothers are the scholars of Morley Place and the Modern Schools, Conisborough, and both musician. Eddieis apianist and played for the church services at his barracks. Norman, a violinist and piano accordionist plays at the Garrison Theatre at his station