SECOND DAY OF THE EVICTIONS

KINDLY CONSIDERATION BY THE POLICE

Under the exceptional circumstance, happily, rarely seen nowadays, at least, on such a big scale, the weather has a great influence, either in somewhat mitigating or in adding to the severity of hardship daily growing.

The dirty atmospheric conditions of Monday presaged ill for the carrying out of the ejectments, for it is generally recognised that at this season of the year, England’s changeable climate might easily turn into a nasty humour, and add considerably to the cup of misery many miners are now forced to quaff.

Evictions at the best of times are not associated with comfort, but when they are carried out in midwinter they are all the harder to bear.

Consequently, there was a real feeling of thankfulness that Tuesday kept fine, and that the hundred evictions were put into force without rainfall, although the village roads all through have been muddy and sticky, churned thicker and thicker through the heavy traffic following on furniture removed for several days previous.

The firstof theeviction proceedings, as before stated, were marked by a pleasing display of friendliness between the evictors and evicted, and the place on Wednesday morning gave further proof of their kindly feelings towards the families they were in duty bound compelled to turn out of their houses. 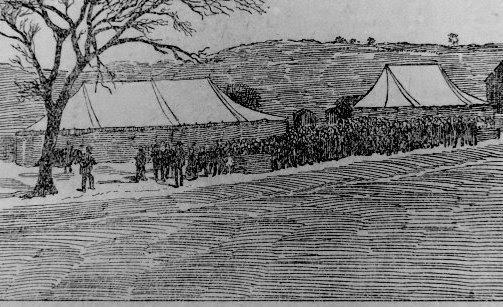 THE RAIN CAME TUMBLING DOWN IN SHEETS

and never ceased to long after nine o’clock, the hour before the police intended to resume the work. At that time they paraded at the same places as on the previous morning, and Superintendent Blake was waited upon by Messrs F Croft (Chairman of the Denaby main Branch), and J Birch, with an application for the evictions to be postponed until the stormy and distressing weather improved.

Superintendent Blake immediately assented to the request, and agreed not to start until 10 o’clock, when the police again paraded. The rain, however, coming down as hard as ever at that time.

Pressed for a further extension Superintendent Blake consented not to proceed until noon, when the evictions would be resumed, whatever the character of the weather. Fortunately, the postponement was not in vain, for at 11 o’clock the rain ceased, and held up for the greater part of the day, once again, enabling the sad work to be carried on without a great additional inconvenience.

Superintendent Blake under the circumstances, decided only to evict those without families, or whose children were grown up, a considerate decision that spared the little ones much discomfort. The surrounding country bore evidence as to the severity of the heavy rain, many fields being nearly underwater, and the outlook for those forced to go under canvas was far from reassuring.

A MORE OR LESS RESTLESS NIGHT,

the families who were located in the various chapels and schoolroom being furnished with far better accommodation.

Certainly the tents presented a miserable appearance in the dark winters morning light, and down the side of the hill on which they were erected the water was literally pouring, and the grass was saturated through and through the canvas too, becoming heavy and dripping with wet.

The interior of the tents was, if anything, less inviting than the exterior, the turf had been cut up, and a sea of mud acted as a carpet. Trenches were dug to allow the ground to drain, and into them the water steadily poured.

Amongst the miners who passed the night under such conditions were Messrs D Moon and W Collier of the men’s committee. Naturally sweet slumber refused its recuperative powers to many other men, and each in turn kept watch and attended to the fire, which was kept burning to warm the tent. A high wind was blowing, and what with this and the absence of a dry boarded floor, the conditions were cold and comfortless.

Many miners who had been made aware that it was their turn to be ejected had for the greater part seen to the removal of most of their furniture save perhaps for a sofa or bed, on which they passed their last night under the old roof.

In the absence of experienced men the previous day the large marquee supplied by Messrs Walmsley, and Co. of Leeds was not erected, but at eight o’clock in the evening, some representatives arrived, and after that late hour an extra tent was erected at Denaby, which was however not used owing to the necessary warming stove not having arrived.

The boardingfloors arrived about 11 o’clock on Wednesday morning, and in the meantime, two of the members of the men’s committee Messrs Gaffen and Grundy, of Rotherham had been despatched to lead to hasten the forwarding of these very necessary adjuncts to the tent accommodation. At the time the boarding arrived a gang of men was employed sweeping the slush and mud from the tent floors, and trenches were being dug around both.

Questioned as to the accommodation secured for the reception of the ejected families, the local strike leaders were fairly confident in

PROVIDING FOR THE DEMAND

and many offers of assistance in this way had poured in from the district around.

At noon the general aspect of the village was cheerless and so as to have everything in readiness a few minutes previous, the leaders sent a whip round for all available carriages to be got ready, and by the available conveyances to be ready, and by the superintendent Blake had given each section of police instructions for the day, the drays were waiting at the doors, and the work was immediately proceeded with.

Many houses were found empty and considerable amusement provided when 10 stalwart constables entered a dwelling, returning almost immediately with an old kettle, the only thing found on the premises, a sarcastic voice ringing out, “it takes 10 bobbies to turn out an old kettle,” a remark which the constables enjoyed as much as anybody.

Previous to the police resuming operations in Melton Street superintendent McDonald urged his men to be as careful with the goods as if they were their own property, an address, which was warmly received by the spectators, although it seemed hardly necessary, judging by their commendable conduct the previous day.

The evictions proceeded with even greater despatchthan on the first day, and this was due to the furniture in many houses being ready packed for removal.

One thing that excited attention was the complete plans made for the storage of the furniture, and it was a subject for remark that more importance seem to be attached to this than the housing of the women and children.

The reverent Jesse Wilson, who with his staff of helpers, which included Mr Cliff (chairman of the Mexborough U.D.C.) and Mr Brumpton (chairman of the Mexborough school board), stated that there had been a good deal of shout and bluster on the part of the men’s leaders about having at their disposal all the accommodation that would be required for the evicted families, yet on the first day of the evictions accommodation had to be found for 20 to 30 families at the Primitive Methodist schoolroom, Mexborough, and other public buildings.

If such a state of things happened on the very first day how were they going to find shelter for the stream of homeless people that was constantly increasing? This was a question which the reverent gentleman asked, and it was one the solution, which did not seem apparent while the second day’s evictions were proceeding.

Mr Wilson suggested that the men’s leaders should, if possible, have gone to the expense of purchasing or hiring some corrugated iron sheds, similar to those used in navvies colonies. At night the chapels and schools make pictures of quite an unusual character, with here a woman cooking, there another bedmaking, and the children playing about, satisfied with a warm welcome shelter afforded them.

The scenes during the progress of eviction were much the same as previous day, and the pathos and humour of the situation were both demonstrated during the day. The policy of no resistance was again quietly followed out by the men, and police showed the same considerable care in dealing with the things.

The first two houses visited in Melton Street, merely needed the formality of an entry, for the occupants had already gone, leaving the doors unlocked behind them.

The streets visited were Firbeck Street, Cusworth Street, Sprotborough Street, Stratford Street, Melton Street, and Annerley Street and Doncaster Road and the operations were watched by captain Russell (Chief Constable of the West Riding) and Mr W.W.Warde-Aldham (a Doncaster magistrate).

The photographers were out in force, taking “snaps” and Mr Jasper Redferns cinematograph operators was always on the spot, the pictures being publicly displayed in Sheffield, the same evening, and in all probability will be shown in Mexborough at a future date.

during the day, bringing up the two days total to 236, so that apparent that, despite a late start, nothing occurred to hinder the work when it was resumed.

The erection of huts and marquees, was proceeded with during the day. One occasionally heard the hardship of the time expressed in the streets.

Our representative was accosted by a pinched and white faced boy, with, “Can you spare a copper Sir?” “We have been turned out, and don’t know where we are going to sleep tonight, and I am so hungry.”

Poor little chap, his wistful eyes illustrated the truth of this statement

Day 3 – Considerable progress with the Work – Array of Empty Houses

Thefts of Sheets at Denaby.