THE IMPORTATION OF FRESH LABOUR.

WILL THERE BE TROUBLE? 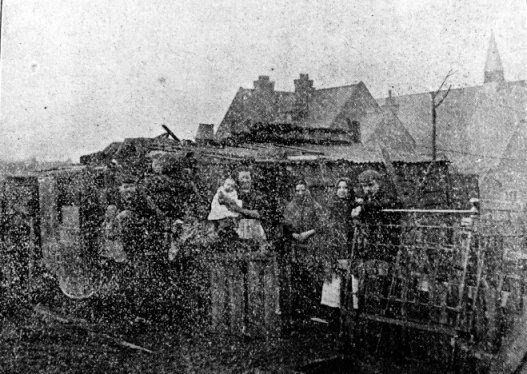 An Evicted Family find refuge in an outhouse

In accordance with anticipation, Friday, witnessed the conclusion of the evictions at Denaby.

During Thursday night there was a heavy fall of snow, but early on Friday morning it turned to rain, and daylight came with foggy and very damp weather. As usual the police turned out at nine o’clock, and paraded, and the work of eviction, was proceeded with in an orderly fashion, the process being brought to a speedy conclusion.

Altogether, nearly 100 evictions were carried out, though a number of the families left their houses before the police, commenced the operations.

The police section at work, at the Conisbrough end of the village terminated their work about 10 o’clock, and the other section, working Cliff View, about half an hour later.

Then the whole of the police engaged in this unwelcome and disagreeable task paraded in Balby Street, where they received their pay.

There is no confirmation of the rumour, which gained currency on Thursday evening, in Mexborough, of the King having moved in the matter, with a view to endeavouring to bring the dispute to a close.

As already announced, superintendent Blake has received no such telegram as was reported, and no credence is attached to the rumour.

were made to the number of families who were accommodated in the chapel at Mexborough and Denaby. Some men again passed the night in the tents near Conisbrough station and a few young fellows at Mexborough, but then notion that these shelters would ever be used for families is now entirely scouted.

The strike leaders still report having offers of ample accommodation, special readiness being shown by sympathies in the surrounding district to make the children affected happy and comfortable.

At the Primitive Methodist Chapel, Mexborough, the arrangements for the accommodation of the various families taken in are more comfortable than those at the chapel of this denomination at Denaby. In fact there is also much appearance of order and general comfort in the Mexborough Chapel, as in a hospital ward.

No further information transpired during the forenoon.

served on Messrs Nolan and H. Humphreys, two of the men’s leaders, the strikers principles being loth to divulge any information on the subject

Friday was the usual day for the miners concerned to receive their strike pay. At noon the payment commenced, the most of the Denaby Branch receiving theirs at Mexborough, and those of the Cadeby branch at Conisbrough. The same amount of strike pay, that has been given during the past few weeks was again distributed – namely, 9 shillings (45p)per man and 4s 6d (22.5p)per lad.

In addition “nipsey” money to the amount of 6 shillings (30p) per man and 3 shillings (15p) per lad was given out. From those figures you’ll be seeing that there is at present no prospect of the evicted miners and their families lacking the necessities of life.

The question of the possible

into the district is much discussed today.

As previously intimated, the colliery company are not showing there hand in this matter. It is, however, rumoured that the pits may be opened towards the latter end of next week, and that by tomorrow week some developmentsin thequestion of imported labour may be expected.

The rumour is not authenticated in anyway. The strikers themselves do not believe there is any likelihood of men being imported into the district to take their places. The difficulties in the way of this colliery company obtaining men prepared to commence work at the pits shortly are, no doubt, great, and under the most favourable conditions from the companyÂ´s stand point, the strikers do not think that anything like the number of miners who come out on strike – some 2000 can possibly be procured.

Friday morning’s evictions were even

than those of Thursday, and the slight amount of furniture, now that had to be deposited in the streets was very quickly conveyed away to storage, so many people having previously flitted. As an indication of the rapidity with which the inhabitants concerned had left, it may be stated that in one street – Tickhill Street – where there were 12 warrants were executed, everyone under warrants concerned had previously left.

Altogether, about 120 warrants were executed, but in very few cases had the police to touch an article of furniture.

Shortly before noon, the majority of the mounted police left, but five mounted men were retained. The greater portion of the constables on Fort have also been leaving my very strange, and for the present, only about 30 police – the same as on Monday – are being

RETAINED IN THE VILLAGE.

This apparently denotes that the police do not at present anticipate any disturbance occurring in the village, but there is a very general fear expressed that if Labour is imported from elsewhere there may be trouble.

Every effort is, however, be made by the men’s leaders to induce the men to refrain from any disorder during the struggle, and it is freely recognised that a disturbance would only damage their cause in the eyes of the public outside, many of whom are, of course contributing towards the “nipsy” money, which is, helping the men and their families so considerably at present.

The men do not think that at present there are more than a dozen or two of underground men, and they assert that the greater proportion of houses left occupied in Denaby of those inhabited by top men. A large number of the 2000 men were originally came out on strike it is asserted have

elsewhere, and the 750, ejectment orders practically account for the rest. There appears to be no flagging in the men’s determination. Indeed, some of them hope even now for a settlement, to be arrived at and are not leaving the district.

Several families are housed in what is known as the tithe barn, in Church Street. The distress in the district is naturally growing more and more acute, and one trembles to think of what matters will eventually arrive at, providing a settlement is not quickly agreed upon.

The Daily Evictions (pictures on each page)