The Denaby club are scarcely recovered from the shock of last year’s colliery disaster, and it will be a strangely altered team which will take the field to do battle for the Whitworth Cup. Nevertheless, it will be a strong and workmanlike team, and an interesting feature of it will be the appearance of three leading colliery officials in the side.

Mr C.W. Phillips,who hasperformed so ably with theWath team in the last three seasons, will captain the Denaby side, and not usual for from his generalship and from his polished batting.

Another of the strong men of the team will be Mr H W Smith, the Warwickshire amateur, who had few opportunities at the end of last season of displaying his prowess. He is a brilliant wicket-keeper, a worthy successor to Narroway, and a bright, forcing that.

Mr John Cocks, the new Cadeby manager, is also a useful all-rounder, and has played in good Warwickshire and Staffordshire club cricket.

Scott re-appears resulting after a couple of seasons at Mexborough and his return will be heartily welcome.

Luther Robinson is again expected to be one of the props and stays of the side, with his illimitable enthusiasm and superb judgement both with bat and ball.

Arthur Robinson too, will be very much to the fore, and Denaby cricket lovers will be pleased to know that the nasty accident to his hands which he sustained a month or two ago leaves his bowling finger unimpaired.

“Crick” Smith, the old groundsman, has gone with Jack Esland to Bolsover, and for the first time for a number of seasons Denaby will include a professional in the team, in G.H.Booth, of Consett, a medium to fast right arm bowler, who will act as groundsman.

Ernest Bromfield has gone to Featherstone, and these are rather serious losses, as Esland and Bromfield are undoubtedly good men. But there are some good youngsters coming up, notably Teddy Hammond and G.H.Atkin.

Nevertheless it will be a sound effect inside that will represent Denaby in the opening match today at Wombwell Main.

The home season is opened the following Saturday with the South Kirby match, which, at Denaby, is always a tough affair. 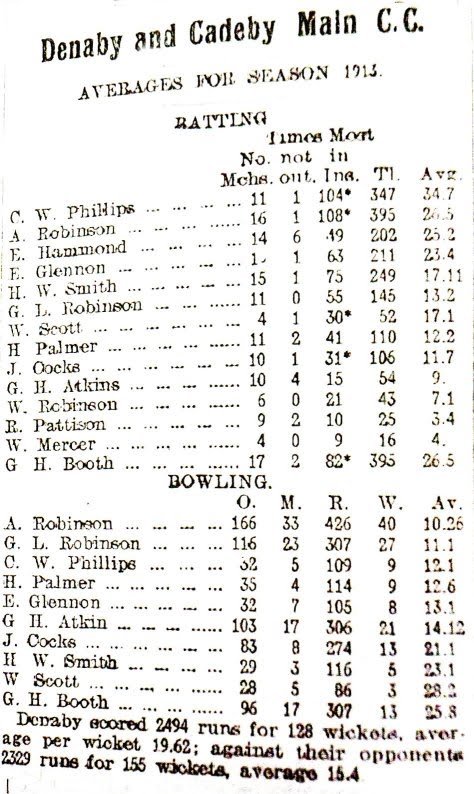