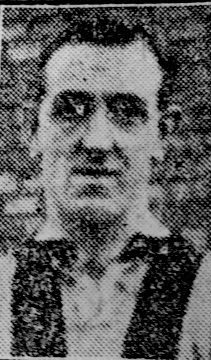 The brideÂ´s brother Mr. George Hollingdrake, acted as best man. The bridegroom formerly played for Leeds City, and for several seasons has assisted the Frickley Colliery Cricket team. He has also played cricket for Mexborough and Denaby.

At the Wilberforce CafÃ©, Jim Hancock presented some “humorous, numerous and costly” wedding gifts to the blushing “Dick” Coope in anticipation of that romantic swains big match at Leeds on Monday.

“Dick” who is very popular with the players and officials, came in for a lot of lively chaff, with plenty of good feeling behind it.

As for “Jim” Hancock, he was eloquent. To hear him discoursing about the moral lessons to be drawn from rolling pins as he handed one over, you would think he had spent his life in telling bed-time stories for the wireless.